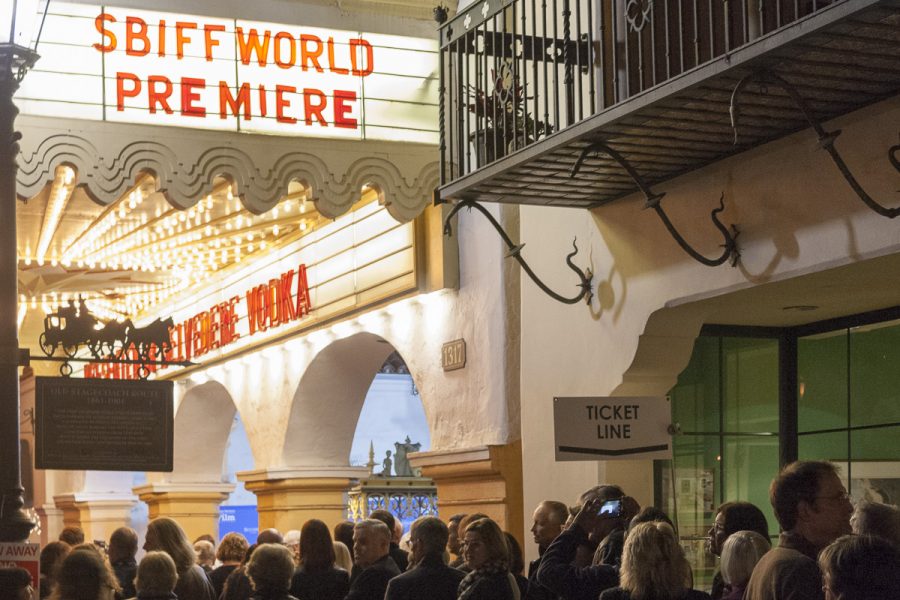 Filmgoers line up to see the Santa Barbara Film Festival’s opening film, “The Public,” at the Arlington Theatre on Wednesday, Jan. 31 in Santa Barbara, Calif.

The 33rd annual Santa Barbara Film Festival opened with an emotional message of solidarity before the world premiere of “The Public” Wednesday night at the Arlington Theatre.

“The events of the past weeks have fragmented this community. We all felt alone,” said Roger Durling, the executive director of the film festival. “We all felt discouraged, and for the next 10 days, we are alone no more.”

Durling, also an adjunct film professor at City College, gave a moving speech to a full house at the Arlington Theatre, addressing the tension and uncertainty created by the recent disasters while affirming cinema’s power to provide relief.

“The magic of movies is not found in just beautiful or haunting images projected on the screen, but in the interaction that happens with your colleagues afterwards,” Durling said. “Film has the power to unify us, make us feel less fragmented as human beings.”

Though the film festival cut back on its publicity and promotions in the difficult weeks leading up to the festival, Durling announced that the festival would continue, noting on a Monday morning radio show earlier this week that it would allow people to come together in a much-needed “collective sigh.”

At the Wednesday premiere, Durling announced that the film festival’s staff will be wearing turquoise ribbons in honor of victims and their families, and to remind everyone of the strength of community.

“The Public,” the film that premiered for the opening night, is the story of a crowd of homeless people who hold a nonviolent sit-in at a public library in Cincinnati, Ohio during a freezing cold spell. The film’s director and star, Emilio Estevez, joined Durling on stage before the film came on.

Estevez’s film puts a spotlight on issues of homelessness, mental illness, and drug addiction, but at its core is a story about a neglected community that rekindles basic human sympathy by barricading itself in a cherished public institution. The fact that the library is the very symbol of knowledge and service offered to all people, rich and poor, is key to the film’s central themes.

Running until Saturday, Feb. 10, the festival will be screening over 200 films representing 53 countries, with 45 world premieres and 53 U.S. premieres. The 11-day event will also include tributes, film-industry panels, symposiums, and student filmmaking and screenwriting competitions.

In line with its opening message about the importance of awareness and community, the film festival will be offering an array of community-oriented programs, seminars, and screenings with free admission, all listed on the festival’s website.