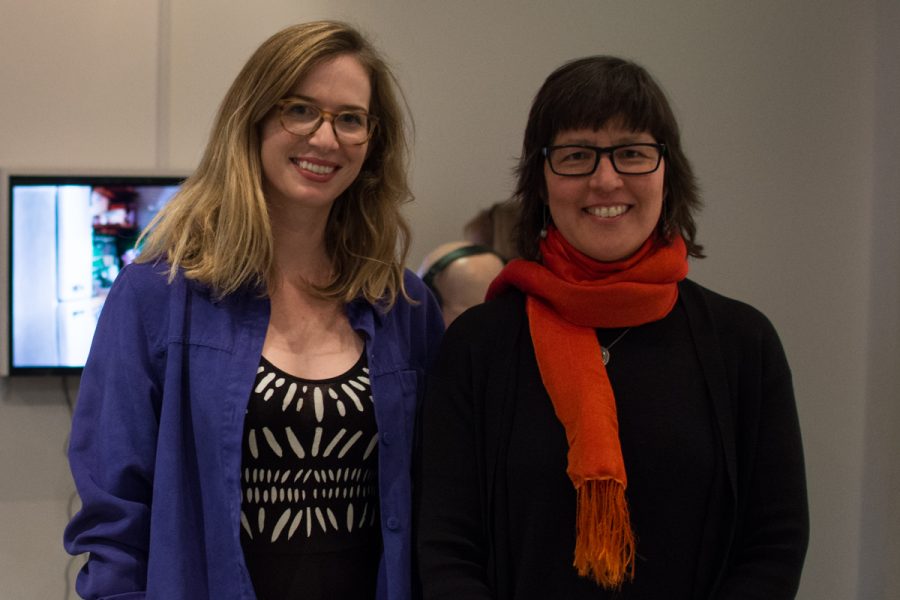 (From left) Laura Krifka, and Heidi Kumao at the opening of "Herself" in the Atkinson Gallery at Santa Barbara City College, on Jan 26. (Alejandro Gonzalez Valle)

Artists Laura Krifka and Heidi Kumao reflected on the creative process behind their stop-motion films for the opening of a new exhibit at City College’s Atkinson Gallery on Friday, Jan. 26.

“My films come out of this other part of my brain, from very personal, raw places and I kind of just let my intuition take me where the story goes,” Krifka said about her work.

The two artists spoke to group of about 90 people in Humanities Building Room 111 shortly before the exhibit opened. Sponsored by the Santa Barbara City College Foundation, “Herself: Girlhood in Stop Motion Film” opens in conjunction with Santa Barbara’s first International Puppet Palooza and will be open through Friday, March 23.

A painting instructor at Cal Poly San Luis Obispo, Krifka started building dioramas as models for her paintings during her master’s program at UCSB, leading her to experiment with stop-motion film.

Her film—an adventure tale about pioneer children caught in the jaws of wild predators—is one of five short films in the newly opened Atkinson Gallery exhibit. The description offered by the gallery is that the exhibits show “girls overcoming their fears, coping with loss, solving problems, and succumbing to/resisting expectations.”

Heidi Kumao, an art professor at the University of Michigan at Ann Arbor, is another artist featured in the exhibit who shared her story. Kumao, originally a photographer, got into stop motion after encountering a zoetrope, a round, 19th-century version of a flipbook that creates the illusion of movement.

Kumao bought old record players and created short loops of gestures with her photographs, finding that the gestures took on new meanings with repetition. Her featured stop-motion film, a compilation of clips of mechanical sculptures performing small gestures, reflects her fascination with repetition and its potential for social meaning.

“They’re just aluminium legs, but I put girl’s tap shoes on them and make them stomp around on top of a table,” Kumao said, referencing one of her mechanical sculptures. “They read as girl, and that’s important to me. They give them a sort of agency and power.”

Both Kumao and Krifka told stories about dreams influencing their art, and both relished the unique spontaneity and experimentation of stop-motion animation. Krifka compared stop-motion with her painting.

“The thing that’s strange is I make really delicate, time-intensive paintings,” she said. “They’re oiled, layered and very studied, and my stop animations are janky. I make all the puppets myself; their hands are falling off all the time.”

It took Krifka 15 months from start to finish to build the sets, puppets and costumes, followed by four months to film and another month to edit. On view at the exhibit, her final product is 8 minutes and 37 seconds long.

Due to its explorations of mortality, violence and mental health, the exhibit is intended for audiences 12 years and older.

Correction: Jan. 30, 2018
An earlier version of this story misstated the number of attendees. The turnout was closer to 90 people, not the originally stated 35. The Channels regrets the error.