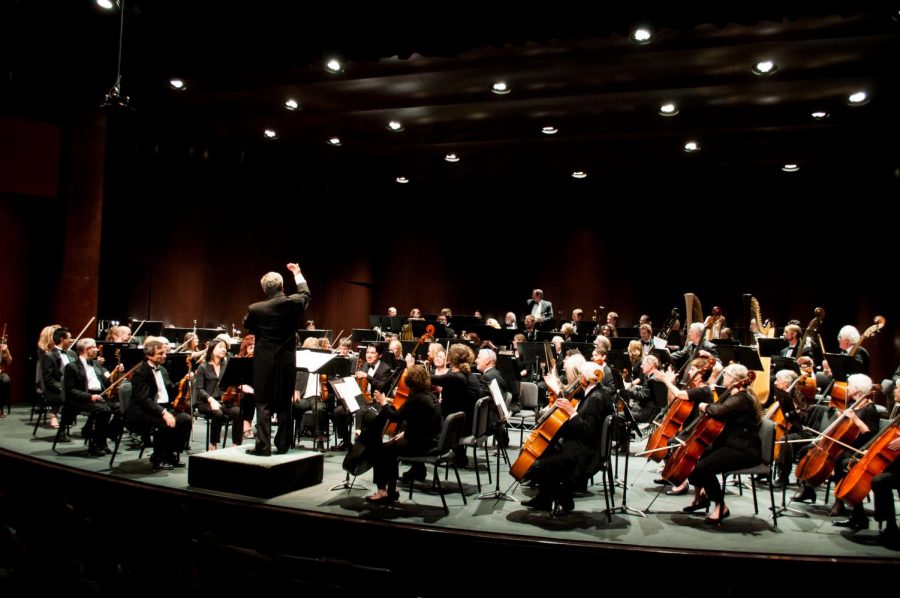 The 80-piece symphony directed by associate professor Jim Mooy consisted of local students and community members, who each proved their musical credibility and successfully stole the audience’s attention.

Mooy’s energetic role as a conductor is parallel with the quality of musicianship coming from each performer.

Before the show, excited conversations filled the theatre as the musicians cleaned and sound checked their instruments to themselves on stage.

Then… the lights above the audience turned off. Aside from the music of course, this is arguably the greatest moment during any type of concert.

The opening piece “Trojan March,” by Hector Beriloz, immediately engaged the audience with it’s uplifting horn and wind sections. The composition that followed was Richard Wagner’s melancholy “Love Death From Tristan And Isolde,” which began very softly and rose into an emotional ballad.

Prior to the second set starting, Mooy pointed out two significant instruments of the evening. City College student, Alexander Price was playing a contra-bassoon, which is notable for being able to hit the lowest notes of all the instruments, even lower than a piano.

Another City College student and the music department’s intermediate harpist, Ginger Brucker, got to debut the school’s brand new $25,000 harp which arrived on Friday.

Although the harp was not a focal point of the evening, at the times it was isolated, it would gently refresh and surface above the whole orchestra.

Before I knew it, it was time for intermission. “Wow,” a woman sitting behind me said, “I was just in a trance.”

The evening closed with a 30-minute epic piece entitled “Pictures At An Exhibition,” by Modeste Mussorgsky.

Mussorgsky’s now 95-year-old piece was originally inspired by Victor Hartman’s art gallery in honor of the artist’s passing. Each musical picture within the song represents Mussorgsky’s experience walking through a gallery and looking at all of the art.

The joyful promenade sequences were very bouncy, whereas the art pieces were portrayed with more eerie soundscapes. The contrast within these tone and tempo changes were brilliantly effective.

This musical affair highlighted every musician on stage, with numerous crescendos that would allure my eyes and ears directly back to the stage.

The City College music department will host another evening of music at the “Jazz Combos” concert at 7 p.m. Nov. 20, at the SOhO Restaurant & Music Club. The show will begin at 7 p.m. and admission is $10.