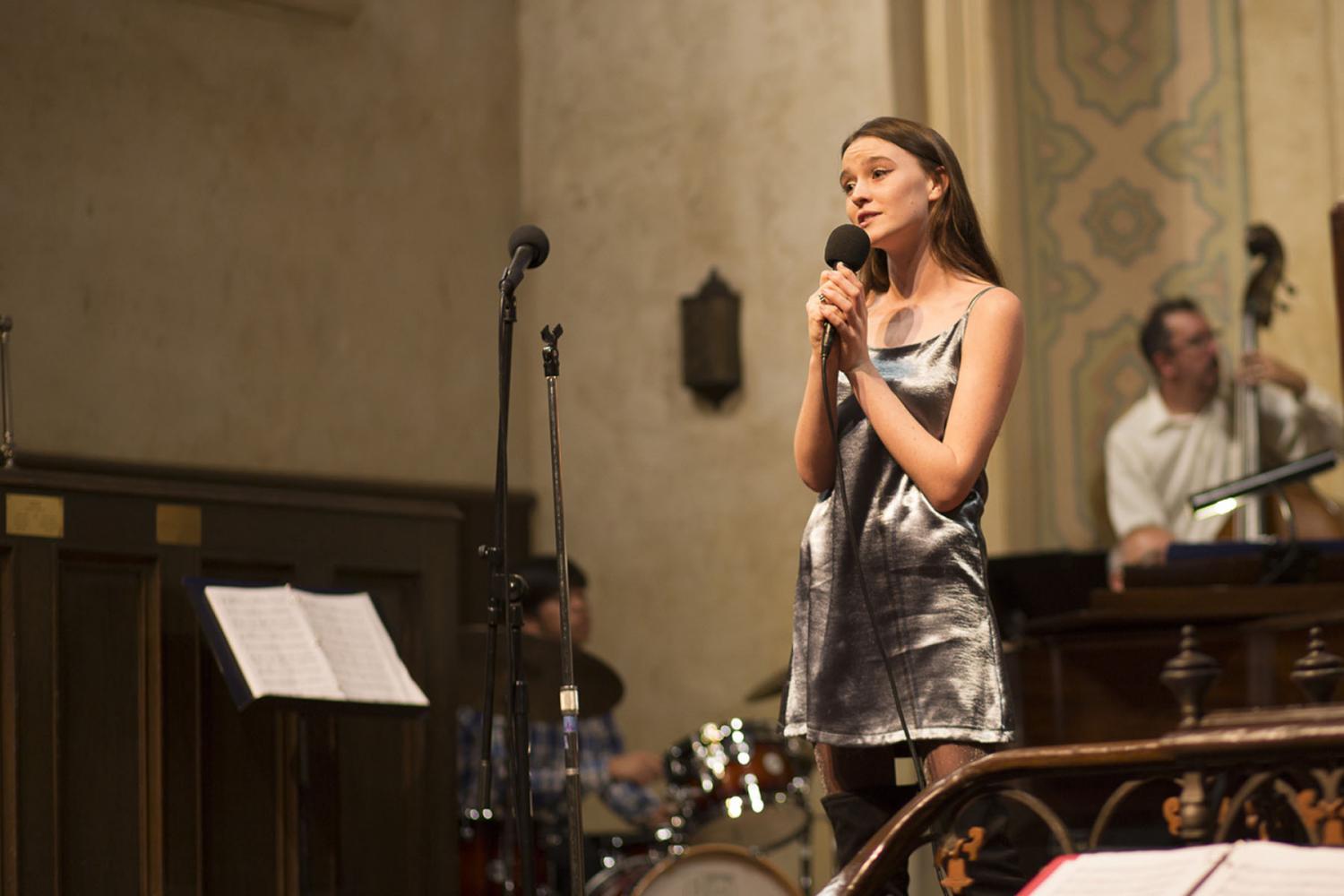 Jane Brody singing "Girl from Ipanema" at the City College Jazz Choir Spring performance on Friday, April 28, at the Unitarian Society in Santa Barbara. Brody dedicated the song to her grandparents in the audience.

Since I don’t regularly attend concerts, I didn’t know what to expect. So when I first heard about Friday’s Jazz Choir concert held at the Unitarian Society of Santa Barbara, I assumed it would be just a big-band jazz performance–something like this–just with a choir thrown in.

To my surprise, the emphasis was more on choir than jazz, though they did have a small jazz band playing–literally–behind the chorus. Dave Campos played the piano, Davis Veralde the percussion and Ralph Lowi the bass. Everyone else in the concert formed the choir.

The opening song was “Centerpiece,” by Jon Hendricks. After the second song, “The Little Hummingbird” by Julia Dollison was performed, conductor Ken Rayles welcomed the audience to the concert.

“Kids these days aren’t as exposed to jazz,” Rayles said. “They tend to choose their music later in life, without the experience their parents had had.”

That might explain the modern eclectic taste of my generation.

The third song was “Lullaby of Birdland,” by George Shearing, a classic jazz standard from the 1950s, which honored Charlie “Bird” Parker and his club, Birdland.

The fourth song was “The Look of Love” by Burt Bacharach. This time, instead of a single row before the audience, the choir all stood on the left side of the stage, completely concealing the band from view. One of the choir members, Kellen Romano, had a brief solo.

The fifth song was “Doodlin’,” by Dizzy Gillespie. Only three people in the choir sang this one: Romano, Grace Fowler, and Victoria Mathews. Rayles joined the three in singing.

The sixth song was “Girl from Ipanema,” by Antônio Carlos Jobim. This was a solo song, sung by Ciara Tolliver, in a voice that would not be out of place in a 1940s nightclub. It was an audience favorite.

The seventh song was “Java Jive” by Ben Oakland. Different members of the choir soloed a few lines–two by Romano, one by Mathews and one by Rayles.

The eighth song, “A Sunday Kind of Love” by Barbara Belle, was another solo performance, this time by Mathews. According to Rayles, this is her last year in the choir–she will be graduating afterward.

The ninth song, “Call Me the Breeze” by JJ Cale, was soloed by Romano, who also played guitar at the same time. Lowi, the bassist, moved up to the front, next to Romano, for the performance. It too proved an audience favorite.

The tenth and final song, “I’m Hip” by Bob Dorough, was the big bombastic performance that made sure this semester went out with a bang. The orchestra took a bow at the end, and that was the end of that.

The concert was briefer than I expected–we were in and out within the hour–but it left me wanting more.

Fortunately, other City College music performances will be held not too far into the future. The next performance is City College Symphony’s event, “A Night at the Opera,” set for 7:00 p.m. April 30, at the Garvin Theatre.