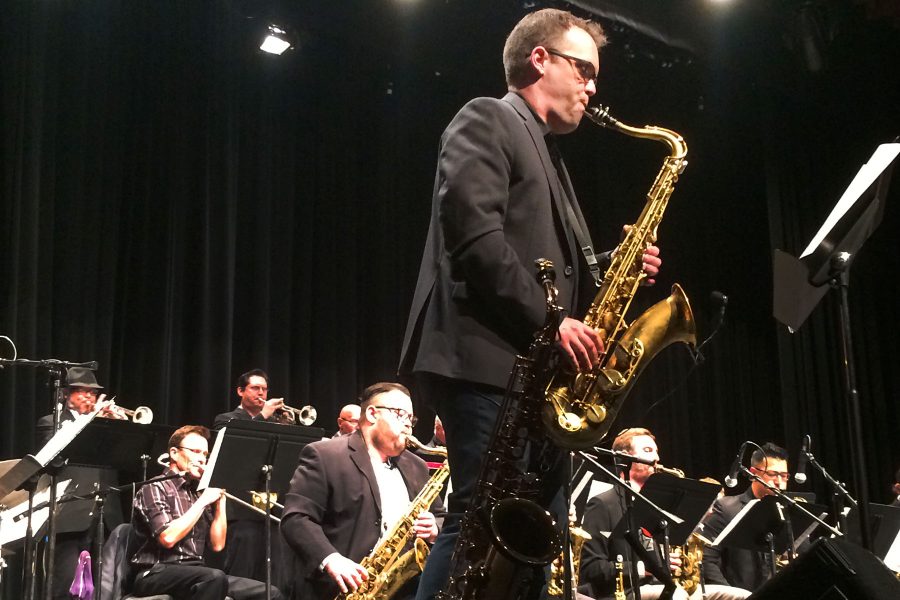 As rain clouds draped over the Santa Barbara mountains, students, residents and visitors gathered to relax and unwind after the week at City College’s oceanside West Campus theatre.

Each group had a unique style to bring to the table. Whether the bands were playing swing, modern jazz, classic jazz or blues, I was hardly alone in being unable to keep myself from shaking my foot or bobbing my head to the beat.

The concert opened with City College’s intermediate band Good Times Big Band, directed by music professor Eric Heidner. Its opening number, which had yet to include Garren, already set a high bar for the rest of the show, yet somehow each act was even better and more energetic than the last.

The group’s cohesiveness and punctuality carried two pieces arranged by Sammy Nestico, which included standout performances by Mike Wheeler on trombone, Max Maynard on trumpet and Wayland Fultz on piano.

The third and final piece of Good Times Big Band was “Standing in the Rain,” a melancholy yet romantic piece which included Garren, who Heidner first introduced as “one of our own legends”.

The highlight of the night was arguably City College’s advanced jazz band, Lunch Break Big Band, in its performance of “Liberty City”. Multiple student soloists had the chance to put their talent on display for the audience in this piece.

In the battle of the saxes, Garron, Evan LaFlamme and Brandon Boyd executed multiple elaborate long duet and trio performances, by which after the audience likely had sore hands from clapping so much.

Even before the final act, it was clear that out of all the musical performances I’ve seen at City College, this one was the best. The $10 admission for students and seniors and $15 admission for adults was well worth the price.

As Jim Mooy, director and associate music professor, noted in passing, Garren’s celebrity and immense amount of talent he had to share with the audience added huge value to what was already a steal of a show.

And Garren wasn’t the only professional playing: the Monday Madness Big Band who closed the show is made up entirely of professional musicians.

The band’s best song was full of chromatic scales, fragmented instrument melodies and improv-sounding solos, which fully captured the essence of the title of the song: “Nutville.”

It was fast paced and intriguing, often building tension and enticing me to wonder what would happen next. Every band member seemed to be doing something completely different, yet it all somehow worked together, which was what made the piece so cool.

What was supposed to be the final song of the night followed, and it just couldn’t quite measure up to the splendor of its predecessor. Monday Madness director Isaac Jenkins seemed to agree, when he said that the band had “lost a bit of heat” during the last song. He then announced to everyone’s surprise that there would be a final song, which the band would play from memory.

The funkiness of “Life in the Bubble” brought back the energy of the of the evening, and ended the evening fittingly.

The next major City College Jazz concert will be the Big Band Blowout at 7 p.m., May 1, at Garvin Theatre.

Correction: April 13, 2017
This story includes grammatical or spelling corrections to a previous version.