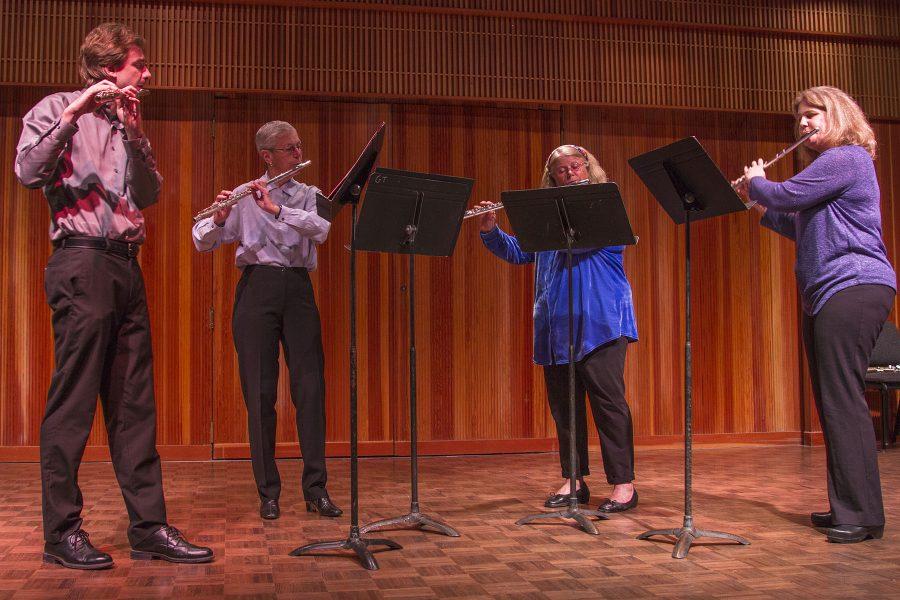 The Flute Quartet Trevor Dolin, Karen Dutton, Pamela Romani and Meredith Sedwick perform three pieces at the Chamber Winds Concert on Sunday, March 19, at the Fé Bland Forum. They played “Carinhoso Traditional” by Alberto Arantes, “Elegy” by Joseph Jongen, and “The Salt of the Earth” by Catherine McMichael.

Despite a few technical sound issues, City College showed off its extensive list of musical wind performance groups Sunday night during a free concert at the Fe Bland Forum.

Students and adults gathered to top the week off with the Chamber Winds concert, which featured seven different City College wind performance groups. While the show began with a rocky start, it turned around into an overall fantastic performance which seemed to end too soon.

The show opened with the Trumpet Ensemble, an octet of multi-generational students, staff and community members. Due to the acoustics in the forum, the group’s short opener was overpowering and seemed to overfill the forum, particularly for those sitting in the front.

The octet later delighted the audience with a set which displayed the versatility of the trumpet, ranging from the American folk classic “Shanandoah” to a triumphant piece from the 16th century called “Renaissance Intrada” by Hans Leo Hassler.

While individual talent stood out, some of the smaller and newly formed winds groups struggled towards the beginning of the concert in pace and unison, as it may have been one of the first few times they were performing together. Flutist Trevor Dolin gave multiple highly technical solos with ease, exhibiting years of experience with not only playing the flute, but performing it as well.

In addition to other horn groups, the Sackbut Quartet, led by music professor Eric Heidner, was also able to take full advantage of the forum’s compatibility with the dramatically full and rich crescendos the instrument provides. The sackbut, an early form of trombone used in renaissance music, played largely within its intended use for bright and majestic fanfare style music.

There were also notable performances from the Saxophone Quartet, particularly with Andrew Martinez and Tito Hernandez, both of whom got lost in the music and appeared to relish in every second of their incredibly complicated solos.

The outstanding solos did not overshadow how well the group played together and how fun they were to watch. The performance was so fluid that it could have been recorded and put on an album.

The evening concluded with the Trombone Choir, a group of 13 musicians conducted by Cody Anderson, who not only performed with the Horn Quartet, but arranged three of the pieces played throughout the night.

“You may be familiar with this song,” Heidner joked to the audience before the Choir erupted into a stellar rendition of Queen’s “Bohemian Rhapsody.”

Overall, the show turned out to be a great success, and served as a reminder of all the excellent opportunities City College has to either showcase or enjoy art.

One does not have to consider themselves a “jazz fan” or a fan of any specific kind of music to truly enjoy the shows that City College has to offer at an incredibly affordable and often free price. The next performance featuring City College’s musical jazz groups will be at 7 p.m. Monday, March 20 at SOhO, and at 7 p.m. Friday, April 7 at Garvin Theatre.