SBCC singer on her way to making mark in music industry 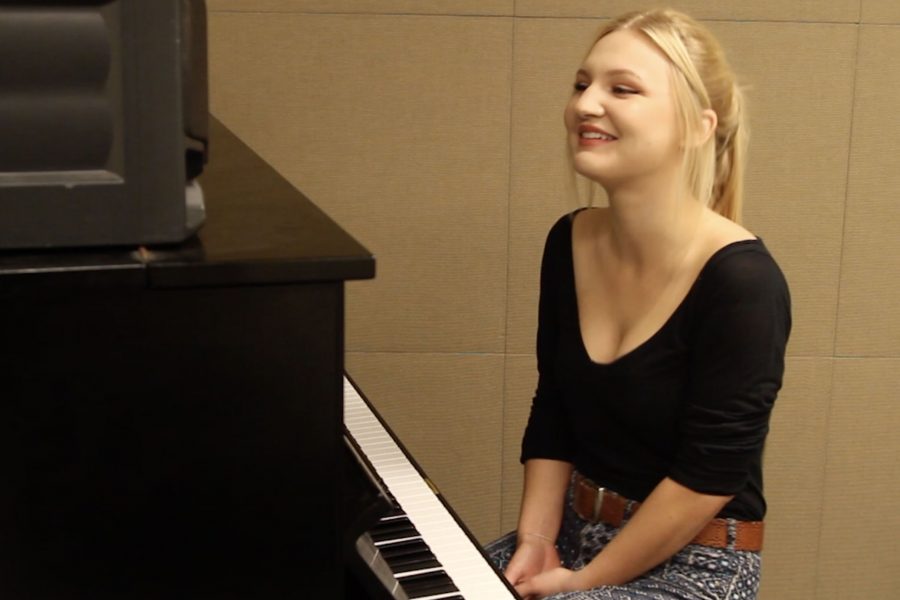 When music major Cambria Metzinger takes the stage, she smiles as she grooves to the music. It is easy to hear the raw talent and years of perfected technique in her clear, bold voice.

Before singing for an audience, Metzinger said she feels more excited than nervous, and prepares by thinking about the music she is about to perform.

“It’s about the message I want to convey with the song, how I want it to affect the audience,” she said. “That’s what I’ve learned from theater, and I try to apply it to any genre.”

With nearly sixteen years of performance experience under her belt, Metzinger is on her way to making a mark in the music industry.

The Goleta native’s singing career has ranged from the Young Singers Club at age 4, to a high school classic rock band, churches, theaters and jazz clubs.

Metzinger is not only passionate about playing tenor saxophone and singing classical, jazz and musical theater, she also paints, draws, writes music and plays piano.

Her love for painting and drawing won Metzinger an arts scholarship, which lead her to enroll in City College as an art major. But after enrolling in some of the college’s musical performance groups, she found herself focusing on music and doing art on the side.

She changed her major to music after being allured by the City College’s Applied program, offered exclusively to music majors. The program requires an audition, weekly lessons with a professional instructor and three recital performances per semester. It also requires logging 6 hours of practice per week, totaling 84 hours of practice a semester.

Metzinger said her Applied instructor, Nicole DeChaine, has impacted her as a singer. She added that DeChaine’s connections with other music programs at four-year programs will play a pivotal part in her future.

“It’s a lot about connections in this industry,” Metzinger added.

Metzinger said her parents, who do not come from a music background, worry about her pursuing a career in arts as opposed to a field with more job security.

“There’s not a lot of understanding,” she said. “They’re supportive, but they want me to make sure I go to a good school and get a good job where I can make a name for myself.”

Metzinger said she is most inspired by her vocal coach of over six years, Sharlae Jenkins. Jenkins helped Metzinger, a natural alto, to expand her vocal range to soprano.

“She has an incredible work-ethic and is not afraid to take risks,” Jenkins said. “Cambria is strong and confident, but is also wonderfully humble and kind to her fellow musicians.”

Metzinger plans to transfer to a four-year program, where she will study classical voice. She hopes to attend graduate school and perform professionally throughout her twenties.

While she welcomes the uncertainties of the future, Metzinger dreams of teaching music and impacting her student’s lives the way that she was.

“Music has changed my life, and I don’t know what I would do without it. It’s the way I express myself. It’s something that I love, and am so passionate about.”