Sexist yet satirical, ‘A Flea In Her Ear’ fills Garvin with laughter 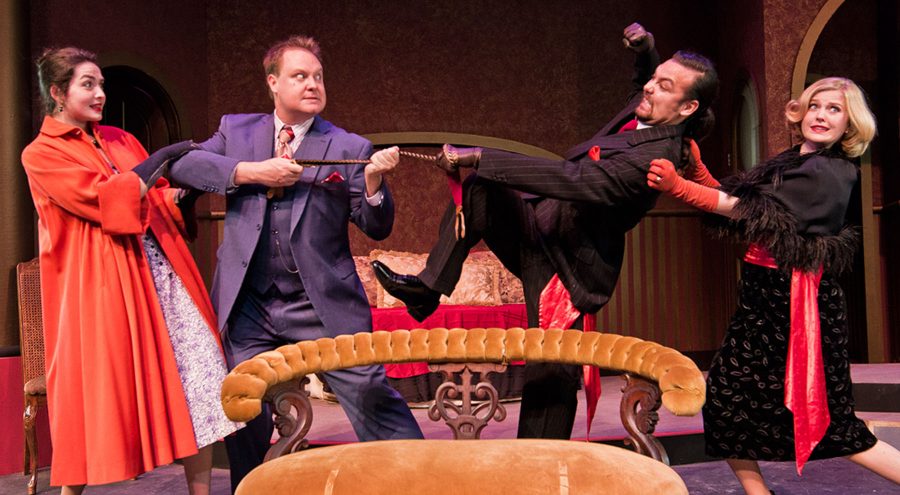 Courtesy image of actors Addison Clarke, Sean Jackson, Pacomio Sun and Courtney Schwass in the City College production of “A Flea In Her Ear.”

Had I not known of the premise and characters of “A Flea In Her Ear,” I would’ve assumed I was attending a 1950s drama about betrayal and heartbreak in an aristocratic family.

The facade was shattered within minutes as Camille Chandebise, played by Stefan Wayne, is spanked by the feisty housemaid Antoinette, played by Paisley ForsterSaunders.

While opening night of the play on March 3 did not go perfectly, the mistakes only added to the comedy. The Garvin was filled with consistent laughter from the young to the old in the nearly filled theatre. Even the actors had a hard time keeping straight faces.

During a scene set at the Frisky Puss Hotel­­––which is as floozy as it sounds, one of the doors lost its hinges and broke from the frame as hotel guest Rugby, played by Stuart Orenstein, angrily whipped it open. For the rest of the scene, the actors did a flawless job of covering up the faux pas with ease, even making occasional impromptu jokes about the damaged door.

Among the brilliant and talented actors, the couple that particularly stood out was the eccentric pairing of the theatrical Lucienne Homenides De Histangua, played by Courtney Schwass, and the ferocious Don Carlos Homenides De Histangua, played by Pacomio Sun. They entered every room with an announcement of their presence and stomp of their feet. Their loud voices and overdramatic personalities were humorous and enticing throughout the whole play.

Aside from the energetic actors and clever story line, the sets were ravishing and colorful with blue and purple striped walls in the mansion set and six doors that were constantly slammed by the characters. The Frisky Puss Hotel set included gold silhouettes of felines on a bright pink background placed meticulously throughout the set. Not to mention, there was a bed in Room 5 that spins!

The costumes were as equally impressive. Olympia, played by Michele Minor, wore a pink dress that flew up in the air when she spun, revealing her sensual fishnets. By the last act, all the characters’ costumes are torn or taken off in some manner, whether on purpose or by accident.

The play’s overall tone is rather sexist and demoralizing based on the male characters’ regular comments on a female’s worth, which they base on appearance. One of the characters makes nonconsensual advances towards another. However, the play’s obvious satirical nature proves how ridiculous and inappropriate such actions are.

They will also be showing a 2 p.m. matinee performance on March 12.