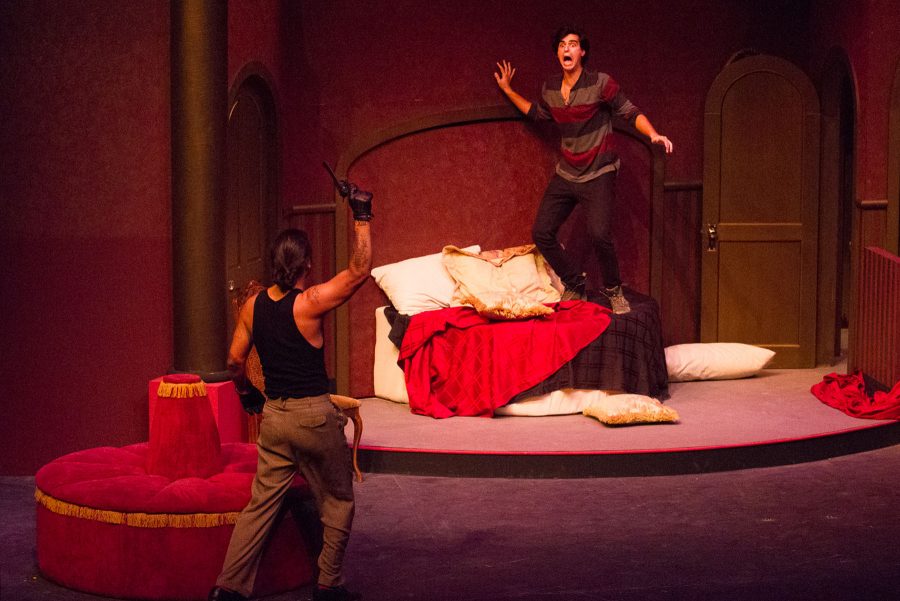 Pacomio Sun (left) and Stefan Wayne perform a dramatic scene during the stage crew viewing of ‘A Flea in Her Ear’ on Tuesday, Feb. 21, in the Garvin Theater at City College. This R. Michael Gros production, will run from March 1 to 18.

Contemporary playwright David Ives’ modern adaptation of “A Flea In Her Ear” will be performed March 1 to 18 at the Garvin Theatre after nearly two months and countless hours of preparation.

Winner of a 2006 Jefferson Award for best adaption, Ives brings playful humor to his American version of Georges Feydeau’s 1907 play.

The play, which originated in France, takes place in 20th century Paris at the comfortable home of Victor Chandebise, an insurance executive. Madness ensues after Raymonde, Chandebise’s wife, suspects her husband of having an affair and writes him a deceptive letter in hopes of catching him in the act. From there, a series of misunderstandings bring about misplaced anger and a potential murder.

This fast-paced production includes spanking and kicking, a man who can only pronounce vowels and the phrase “to make the pee pee.”

Sean Jackson, 34, is an information technology technician at UCSB. He plays two characters in the production; the wealthy Victor Chandebise and bellboy Poche.

“They’re supposed to be very similar so I can’t go too far with the differences,” Jackson said. “I try to find subtle differences between the two yet keep them similar and have the same mannerisms.”

“A Flea In Her Ear” is directed by Michael Gros, theater department co-chair and associate professor. Gros has directed approximately 15 productions at City College including the production of “Present Laughter,” which Gros won an Indy Award in 2013 for directing.

He is also a member of the Stage Directors and Choreographers Society.

The play runs for two and a half hours with a brief 10 minute intermission.

The Garvin Theatre is located at 721 Cliff Drive, Santa Barbara on West Campus of City College.

Snacks and refreshments will be provided by the School of Culinary Arts and Hotel Management. Profits will go to the culinary program’s scholarship fund.

For more information, contact the Garvin Theatre Box Office at 805-965-5935 or purchase tickets online at www.theatregroupsbcc.com.