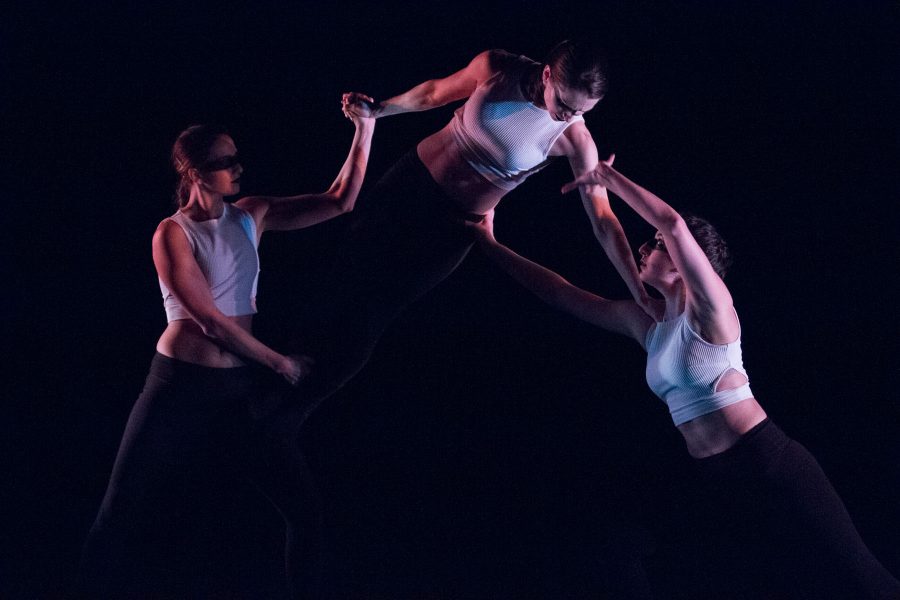 Cosmo D'Aguila, Kathy Lawson, and Rebeca Montecino perform "Pictoral Maxim" at the Center State Theater on Friday, Feb. 17. Their performance was one of of 37 pieces showcased in the 3rd annual HH11 Dance Festival.

The lights dimmed and audience silenced when the SBCC Dance Company kicked off the HH11 Dance Festival in their opening performance that celebrated professional dance on Friday, Feb. 17.

The HH11 Dance Festival showcased a fascinating 12-piece show at Center Stage Theatre. The variety of pieces evoked different emotions from the audience with each performance.

Shelby Lynn Joyce was invited to choreograph for the Santa Barbara Dance Theatre. She has choreographed dances throughout her career on the East and West coasts, which brought meaning to the name of her piece for this event, “Until East Meets West.”

Joyce started off the night with a dramatic contemporary piece.

The spotlights flashed and broke the darkness of the theatre with the performers onstage, bringing the audience members to the edge of their seats.

Throughout the majority of the piece the dancers weren’t executing the same movements, yet they were stunningly in sync with each other. It was clear that the Dance Company had great chemistry and had rehearsed this piece to perfection.

The dancers stood still with their backs to the audience in powerful, confident, warrior-like stances, while a female performer weaved through them. As she shoved them, bumped them, and even jumped on them, the performers remained effortlessly still.

Their silent falls to the floor and swift gliding movement, along with brilliant chemistry, ended the piece with a cheerful audience who broke out in applause and encouraging shouts.

Equally entertaining pieces followed Joyce’s that made the people in the audience go completely silent as well as break out in laughter.

One of those pieces was Alyssa Casey’s intriguing, interactive, and humorous choreography titled “Squatch!” Three performers crawled around, shouted, and made animal noises. The performers implied that they were sasquatches which brought the audience to laughter throughout the entire piece.

As they began to make noises mimicking the sounds of the chosen music, they began to enter the crowd and interact with the audience. The audience involvement of this piece made it fun, surprising and very entertaining overall.

On the opposite end of the spectrum, there were very moving pieces like “Interstice”. Peter Cheng, a UCSB alumni, not only choreographed but also performed the piece. The use of lighting is what really brought this piece to life.

While Cheng stood as a silhouette, light began to glow on one side of his body and the audience was able to see every vein, bone, and muscle with each movement he made. Although it was a beautiful piece on its own, the light was the key to bringing his truly fascinating solo to life.

Other performances continued to keep the audience engaged with upbeat music, stunningly synchronized breaths of the performers, storytelling performances, and even street style dancing in the mix of predominantly contemporary pieces.

This story includes grammatical corrections to a previous version.