Concert series kicks off with jazz band performances at SOhO 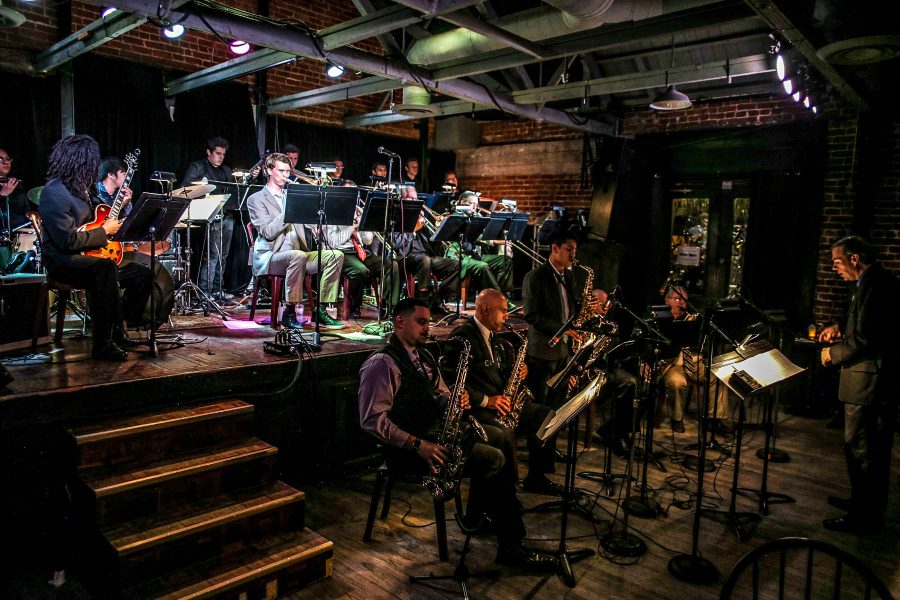 The City College Good Times Big Band plays in front of a crowded room on Monday, Feb. 13, 2017, at the Soho restaurant and music club in Santa Barbara.

Good Times Big Band opened the show with a bright and energetic piece called Time Stream by Sammy Nestico, which featured the entire band, highlighting the bass, trumpets and saxophones.

The band played extremely well together as one cohesive unit, and each of the soloists displayed massive amounts of potential.

The next song titled “Samantha,” composed by Nestico as well, was a slow romantic ballad with a “Midnight in Paris” feel.  Matt Jimenez played the alto sax with passion, capturing the pre-Valentine’s Day love in the air.

The following songs performed by Good Times were upbeat and full of energy that filled the high walls of SOhO. The “Jitterbug Waltz” by Thomas “Fats” Waller featured stellar performances by trumpet soloist Max Maynard and Davis Velarde on drums.

For an intermediate ensemble, I was very impressed. In future performances, I hope to see the individual performers relax, have fun, and let their personalities show.

In between the two main sets was a short interlude featuring the New World Jazz Combo, a group of students and community members that required a separate audition.

The small handful of performers included Brandon Boyd on alto sax and Westin Byrley on drums. Both performers were relaxed and immersed in the music they delivered to the audience.

The second set was the advanced jazz ensemble, Lunch Break, which is comprised of both students and community members.

They opened with a vibrant and triumphant sounding piece called “Liberty City,” which was carried by the trumpets, saxophones, and gifted piano player David Struven. The middle of the song had a slow and ominous sax solo by Evan LaFlamme, before the entire band chimed in and filled the room with sound for the outro.

“Close Enough For Love” was a bittersweet melody, which featured a long solo by music instructor James Watson on the flugelhorn. Despite director Mooy’s jokes before the song that the group had just read the piece for the first time last Thursday, the song ended perfectly, with the full band giving their utmost energy into their performance.

The set concluded with stellar solo performances including a long drums solo by Byrley in “Blues For Uncommon Kids.”
The next performance will be at 7 p.m. on Monday, March 20, 2017 at SOhO Restaurant and Music Club.