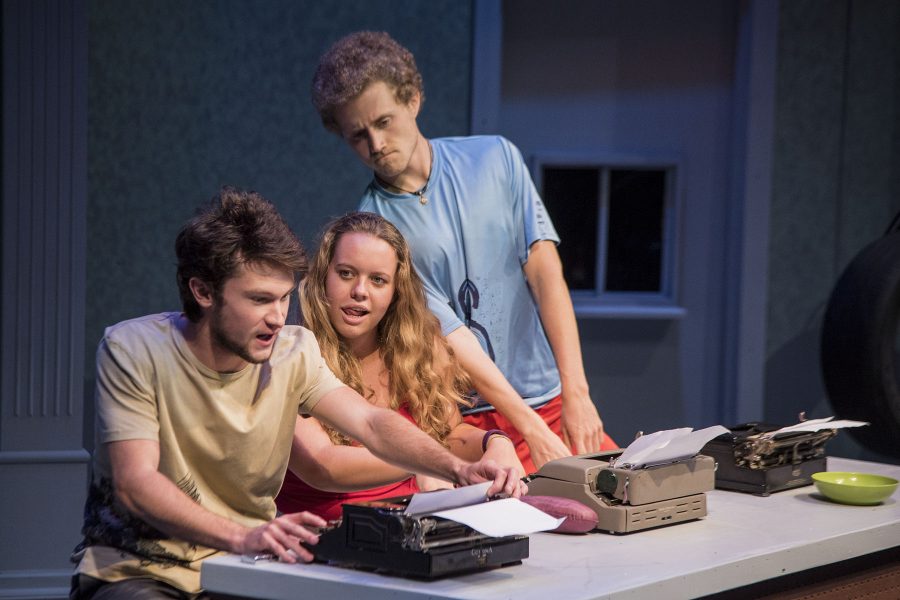 Johnny Waaler (left), Paisley Forster Saunders and Benjamin McSherry rehearse their parts for the show, “All in the Timing” on Thursday, Nov. 3, in the Jurkowitz Theatre at City College. The show will run November 9-19.

Performances are fast approaching City College’s theater department while the actors, technical participants and director still have quite a bit of work cut out for them.

The student showcase, “Comedies by David Ives,” will be performed at the Jurkowitz Theatre from Nov. 9 until Nov. 19. All of the skits were written by David Ives, an American playwright, screenwriter, and novelist, and will be directed by Maggie Mixsell, a theater arts instructor.

The play is a compilation of seven one-act plays, each with a different, comedic story line. Each scene involves complicated rhythms that need to be learned. Audiences can expect an enjoyable, humorous show, Mixsell said.

The short scenes have vastly different premises, but all stay within the same genre. “Time Flies,” is about two may flies on a date that realize they only have 24 hours to live. “Arabian Nights” is about a man falling in love with a shop owner. “Universal Language,” follows a con artist tricking customers into learning a fake language.

The college has used many works of Ives in the past, and will continue with more of his work in the spring. Pat Frank, co-chair of lighting and design, as well as Mixsell both said they like the work by Ives because it is contemporary, witty, humorous and sharp.

Blake Benlan, 21, who is in his third semester at City College, is performing in two of the seven scenes. He said he enjoys the language and the interesting subjects portrayed in his scenes.

Since the show is a series of one-acts and a full-student showcase, it allows many students to be on stage. The 15 actors, costume designers, and the prop person are all students. This is a contrast to the to the other production put on at City College this semester, “Other Desert Cities,” which featured no City College students.

Patrick Lownes-Santos, 20 is in his fourth semester at City College, and in charge of the props.It gives him a different perspective of the theater that he usually does not get, he said. Santos is taking five classes and is also on the track team, which keeps him from acting in the show.

For some students, like Johnny Waaler, 19, this is their first performance at City College. Waaler is in his third semester and said he has been enjoying making friends with all the cast members.

Frank and Ben Crop, theater technical director, have been working to create the lighting and design of the play. Their goal is to find projections for the backdrop while keeping it simple with minimal distractions for the audience during scene changes.

“We are doing something unique this time in that it’s an interior space,” Crop said. “Instead of changing the set every single time, changing the walls and making something very complex. What we are doing is projecting images onto the walls of the sets so we can actually change the location with image,” he said.

Paul Brooks, 32, in his second semester at the college, said he enjoyed the entire experience. He likes watching his fellow cast mates improvement as time goes by.

Ticket cost $18 for general admission, $15 seniors and $10 students. Because of the Jurkowitz Theatre’s small venue no late seating is permitted. Parking is free and near the theater on West Campus, 900 block of Cliff Drive. Call the Garvin Theatre Box Office at (805) 965-5935, or purchase tickets online at www.theatregroupsbcc.com.