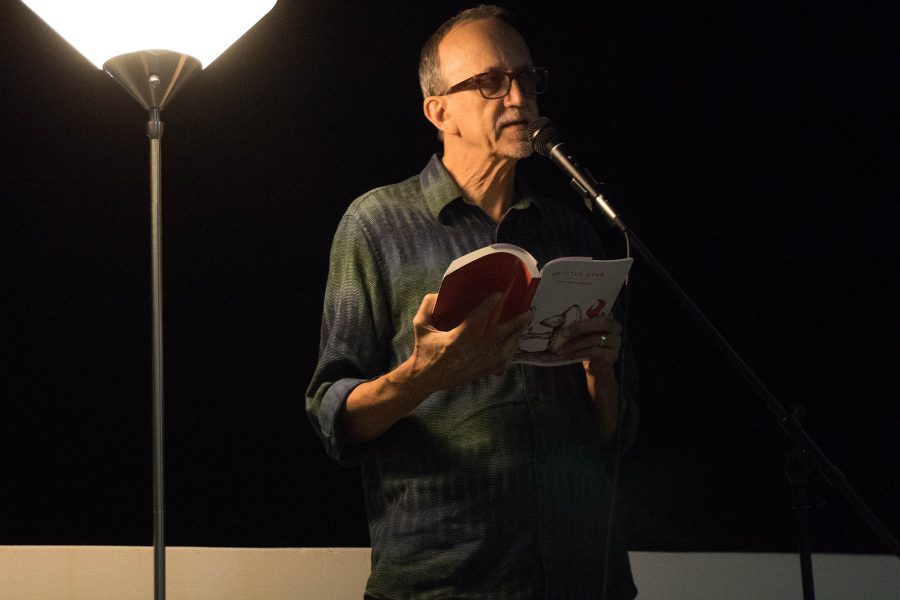 Rod Val Moore, author and member of What Books Press, reads an excerpt from his novel “Brittle Star” at a collective reading performance on Thursday, Oct. 20, on the balcony of the Atkinson Gallery. City College's creative writing department and Gunpowder Press sponsored the reading.

Members from a fiction writing group did a reading of their work, hosted by City College’s Writing Program and Gunpowder Press, at 7 p.m. on Thursday, Oct. 20 at the Atkinson Art Gallery.

Formed in 2007, What Books Press is a collective of literary and visual artists from Los Angeles, which mainly publishes books. The three members, Katherine Haake, Mona Houghton and Rod Val Moore, read short stories and excerpts from their own novels. Many of its current members knew each other from graduate school. They then decided to publish books that go beyond the limitations of mainstream publishing.

The writers stood on a terrace with a view of the foothills behind them. Katherine Haake, an English professor at California State University, Northridge, set the tone with “Call it Milk,” a short story that weaves in the roles of parents as teachers, the distinction between boys and girls and the meaning of death.

“I like to tell my students that the most interesting thing is the stuff that you don’t know how to do,” Haake said. “I’m never that interested in reading anything I’ve finished and published so ‘Call it Milk’ is new work.”

Mona Houghton followed after Haake with “The Game,” a short story about a tennis competition between a brother and sister. Lydia, the underdog of the story, attempts to prove herself by defeating her brother, Dan, in the match. The ambiguous ending cuts off at the climax leaving the readers wondering if Lydia wins or loses.

Houghton instructs writing courses at California State University, Northridge. Her two novellas, “Frottage,” and “Even As We Speak,” won the 2012 gold award from ForeWord reviews.

Rod Val Moore finished off the event with an excerpt from his novel, “Brittle Star.” It was inspired by 1950’s science fiction novels and takes place on a prison planet for academics guilty of academic crimes.

“Coming here tonight made me really appreciate creative writing,” said Liberal Arts Student Magali Resendiz. “And for that I am thankful.”