SBCC concert captivates audience with a night of jazz 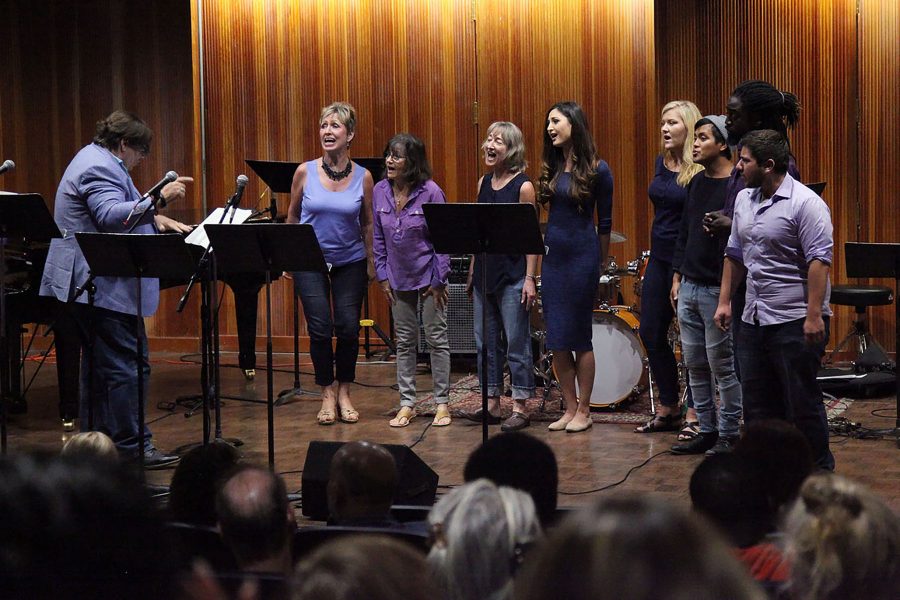 The Santa Barbara City College Jazz Choir preforming a free concert on Oct. 9, in the Fe Bland Forum. The choir was one of several groups that preformed at the free concert.

Shortly after doors of the Fe Bland Forum swung open, people swarmed in to see a night full of jazz, as the two-hour “Chamber Jazz Concert” kicked off at 7 p.m. Sunday.

The free event was filled with improvisation and combos, featuring City College amateurs to the crème de la crème of the program.

The family friendly event had an audience of all ages who enjoyed every minute of it, regardless of who was up performing. It was definitely a captivating show worth going to.

“The Eclectic Jazz Orchestra,” directed by Dr. Chuck Wood, started off the night with some classics. The ageless group sang covers of “Baby it’s Cold Outside,” by Frank Loesser and “September,” by “Earth, Wind, & Fire.”

The effect was chilling when the initial “Do you remember?” lyrics were sung. It set the expectations for the rest of the evening exceptionally high for the groups to come.

The “New World Jazz Ensemble,” directed by Tony Ybarra, also made an appearance. The hand-selected group of seven started their four song show with an astounding cover of the vintage jazz song, “El Gaucho,” by Wayne Shorter.

The only returnee of the group was the talented second year bassist, Sebastian Martinez.

His facial expressions gave life to his art. Instead of being postured up like a robot, he got into his music and let the good vibes flood the forum.

Every member got multiple solos throughout their performance, but Martinez and alto saxophonist Brandon Boyd, solos were spectacular.

The crowd was ecstatic the whole night, applauding every solo. After each song had ended their applause would seemingly never-end.

Their set was closed with “Chucho,” by Paquito d’Rivera. An amazing cover dedicated to the pioneering Cuban-jazz musician, which gave every member of the ensemble their own solo, with drummer Westin Byerly being the last to shine before the group closed out as a whole.

The “SBCC Jazz Choir,” directed by Ken Ryals, had a small but noteworthy showing of two songs. However, those two songs proved the most memorable. Perhaps it was because that there weren’t too many songs being sung, but it was amazing.

With Professor David Campos playing, the choir harmonized simultaneously when they started the song, “Hold Tight,” by Glenn Miller.

This peppy Broadway-like-song about seafood was a shock compared to the rest of the music. The Lyrics “When I come home from work at night I get my favorite dish; fish!” had a comedic effect, but sounded wonderful at the same time because their voices blended so well.

The group of eight had five women and three men who would go back and forth occasionally on notes. The men covering the deeper notes and the women hitting the higher ones. Heads were nodding and the cameras started to come out to get clips of the eccentric gang.

There were also stunning sets done by “Interplay Jazz Combo,” directed by David Campos and the “SBCC Faculty Jazz Combo,” which ended the night.

This was the first concert of the month for the SBCC Concert Series, and two more concerts will be held later on. From 7-9 p.m. Oct. 24, there will be Jazz Night at Soho Restaurant and Music Club, with a $10 cost, followed by Fall Chamber Music from 7-9 p.m. Oct. 30, at the First United Methodist Church.