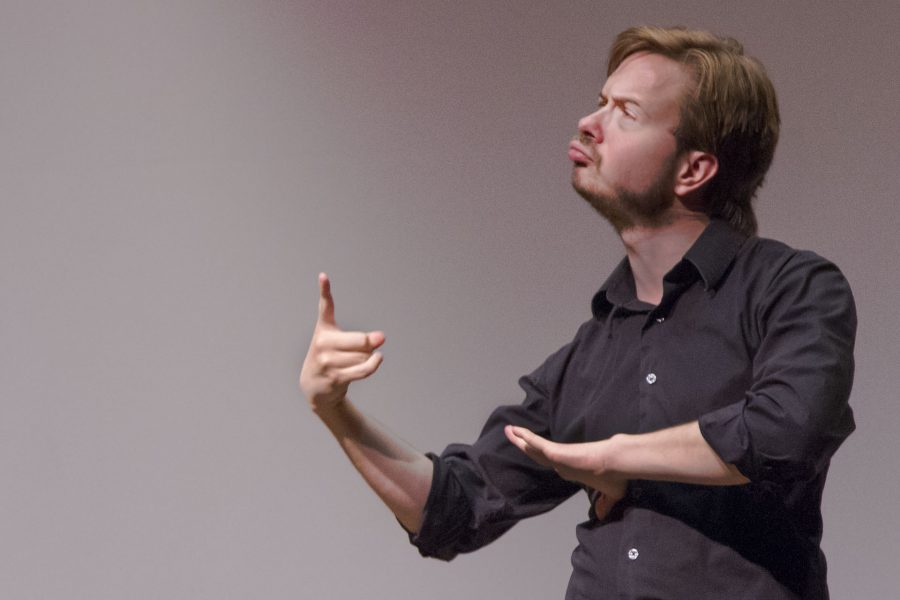 Windell "Wink" Smith Jr. performs a one man show entirely in American Sign Language on Saturday, Sept. 17, at the Fe Bland Forum at City College. The dramatic comedy is about Smith’s parents, Gwen and Windell Smith as well as himself growing up as a child of deaf parents.

There are two things that Windell Smith Jr. undoubtedly inherited from his father: His name and his knack for storytelling.

Smith, who goes by the nickname “Wink,” is a performing artist. His father, whom he describes as a “storyteller,” is one of two main characters in his performance “Gifts from my Deaf Father,” which Smith completely performed in American Sign Language, Saturday, Sept. 17, 2016, at the Fé Bland Forum.

The play was translated to English and Spanish for those who didn’t know sign language.

His performance derives from the story that his father had told him time and time again about his parents, who are both deaf.

In an hour and a half, Smith lights up the stage with his storytelling. The narration began with the childhood of his mother and father and lead into their eventual romance.

“I think this performance has a lot of significance for the deaf-ASL community because we rarely see such performances in the area,” Ponce wrote in an email interview.

“Gifts from My Deaf Father” plays with the theme of antithesis. It is both American Sign Language and pantomime, both comedy and drama. Most of all, it is a story that tells the struggle of a deaf couple trying to make their own decisions in a hearing world.

Smith’s story begins with his parents’ contrasting upbringings. His father, Windell Sr., who was abandoned by his own father, attended Oklahoma School for the Deaf. While here he was surrounded by a supportive deaf community and had full communication access with everyone.

His mother Gwen, who grew up in Minnesota with a strict and adamant family, attended a “mainstream program” with hearing schoolmates, and was expected to learn how to lip-read and speak with broken English.

The play had comedic elements in between the hardships as well, such as his parents’ first meeting.

Smith’s father was at a church service. He attended church with the original intention to “meet chicks,” but once he locks eyes with Gwen he wants to look no further. Immediately he runs home to write a love letter on his typewriter. He then waits another seven days for the next service to give the letter to Gwen in church. Windell’s letter asks Gwen out on a date, to which she signs “yes.”

Gwen and Windell, or “Gwendell,” meet in February and marry in September. As a married deaf couple they live ordinary lives, but it takes a dramatic turn for the worst when Gwen’s car is struck by a train on her way to work, badly injuring her face and sending her into a coma. They then learn she is pregnant.

Windell Sr. has to fight against the doctors and her family to keep the child, who is Wink. This fight is made all the more difficult by the language barrier.

Smith’s performance speaks a powerful message without speaking any words. It offers a glimpse to audience members into the world of someone deaf, someone who lives in a world dominated by hearing people trying to make decisions for the deaf community.

“Gifts from My Deaf Father” suggests that members of the hearing community, rather than making decisions for deaf people, should instead learn to understand and communicate with them.

“American Sign Language is not just a language. This is part of the culture of the deaf community,” said Smith. “Spend as much time and energy with the deaf people in your life and learn from them.”

Smith explains that his father won his mother’s love through communication.

“Through communication you exchange lives, and that is how you build love,” said Smith.