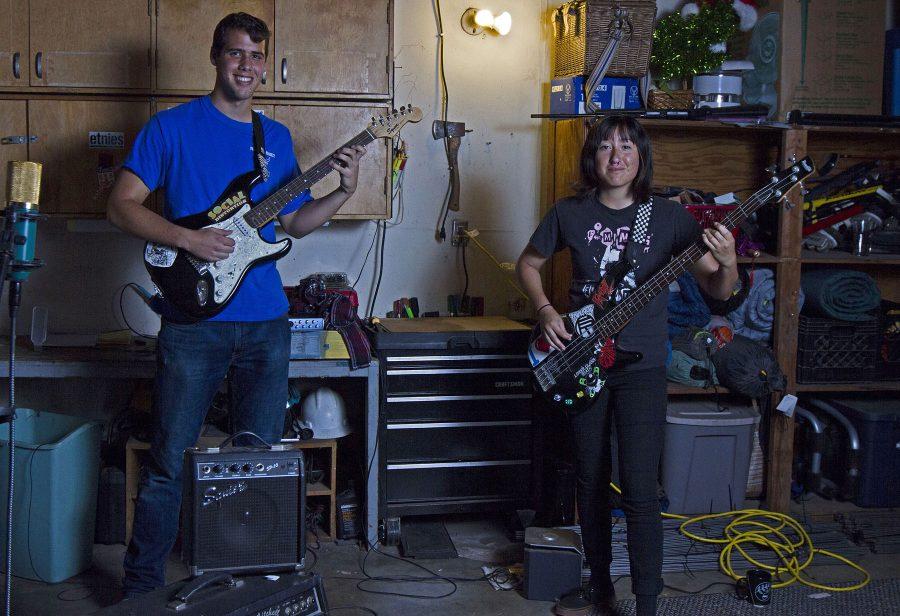 The band “Gloom Me” consisting of Ethan Jones, lead guitarist and vocalist, and bassist Stephanie Luna practice new songs on Tuesday, April 12, in Luna’s garage in Goleta. The Pokemon ska alternative hardcore band originated from a band lottery at the Funzone. Not shown is band member Sydney Hengst.

Sitting in a dark garage with a light bulb casting the shadow of a rusty hatchet across the room, City College student Ethan Jones plays a couple riffs on a guitar.

He’s practicing with bassist Stephanie Luna of their group, Gloom-Me.

The band formed in January this year and is composed of Jones, the vocalist and guitarist, Luna and drummer Sydney Hengst.

“We definitely were lucky that we got a group of people who has vibed really well since the beginning,” said Jones.

The band has played in three shows at the Funzone, also known as the East Beach Batting Cages, and on a UCSB radio show called “Hardcore Backdoor.”

Gloom-Me came out of the band lottery at the Funzone and has been successful in the local hardcore scene. The Funzone generated around 25 bands during the lottery, and Gloom-Me is one of the only bands to still be around.

Hengst has been going to the Funzone since its first show.

“I’ve been going there since the beginning and it has really helped the music scene out here,” said Hengst.

They identify as a “Pokemon” ska alternative hardcore band in which all of their songs are based around “Pokemon” in some way. Ska is a genre of music that originated in Jamaica and is a form of punk reggae. One of the songs is all about attack moves.

“We want to make a song that’s just about all of our favorite ‘pokemon,’” Jones said.

The music is pop punk that is making the transition into ska.

Hengst and Luna are both in prominent local bands. Hengst is in Honey Maid, and Luna is in Vitriol.

“This band is definitely the band I can do what I want in,” said Hengst. “It’s less serious and we have a lot of fun.”

Jones also plays in a band from Encinitas called Papas Piranhas who has recently played on Del Playa Drive in Isla Vista.

The band is excited and are playing at a show in June along with a radio appearance on KCSB 91.9.

“I’m really excited for the radio appearance,” said Jones. “It’s during the afternoon on a Thursday so it should get a lot of views.”

Hengst wants to take the band out of Santa Barbara in the next couple of months to get their name out. They also want to record after summer.

“I’m writing a lot and we’ve been working on new stuff at a lot of the practices,” said Jones. “Right now we have five songs, but we’re building off that.”