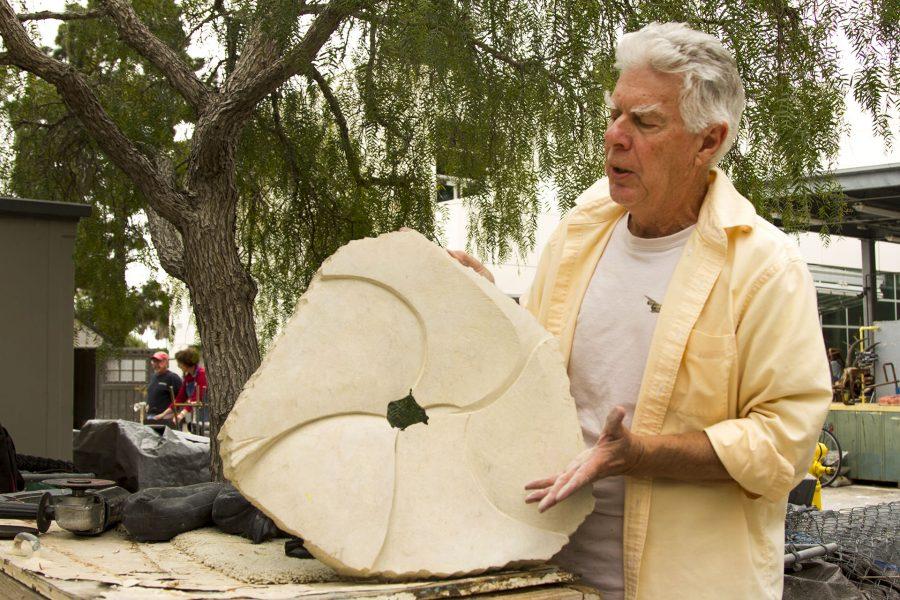 Patrick McGinnis, retired engineer and sculptor, works on a piece from his bitcoin series on Wednesday afternoon, April 13, outside the Humanities Building room 102 at Santa Barbara City College. McGinnis has been featured in multiple exhibits in galleries such as Gallery 113 and The Faulkner Gallery.

Sitting in a sculpture studio inside of the Humanities Building is a man with snowy white hair and eyes full of creativity as he meticulously sands down a massive stone.

City College student Patrick McGinnis, 75, is a retired engineer who has recently explored the realms of being a successful sculpture artist. McGinnis’s artwork has been displayed in numerous galleries including Gallery 113 and the local Faulkner Gallery.

Originally from Michigan, McGinnis has traveled around the United States. He briefly lived in New York but made Santa Barbara his home 30 years ago when a business opportunity brought him here.

McGinnis is heavily involved with the Santa Barbara Art Association, is apart of the Sculptors Guild and recently joined the LA Art Association as well.

“It’s part of the fun, getting to meet other people and see their work,” said McGinnis. “I’ll be 76 in a couple of months, I’ve got more plans than I’ve got time.”

From exploring the engineering world, McGinnis has found a new interest for creating art. He is in the process of opening a new gallery, to be called 10 West Art Gallery, a membership gallery located in downtown Santa Barbara.

“I did have some art talent but it was pretty obvious back then that trying to be a professional artist and support yourself as an artist was not really easy,” said McGinnis. “I was always interested in how things worked.”

Currently, McGinnis has been working on a bitcoin series made of alabaster where he is taking a virtual form of money and giving it a physical form. He is not only addressing the use of a non-traceable form of money, but is also exploring the downfall of the economy.

“Since it was a virtual currency I decided to play of that against the Polynesian stone coins that are made of stone of course and are usually round with a hole in the center,” said McGinnis. “I’m doing a play off of here’s something virtual that doesn’t really exist and here’s something that is tangible and really exists. The color red has to do with the balance sheet and how the color of losses are red, so in that way it informs what is going on as well.”

McGinnis explained that he enjoys working with materials such as aluminum and alabaster despite the fact that both materials are difficult to work with, and have a very limited margin of error available.

“Well [Patrick McGinnis] has been in my classes for quite a few years and his work has changed dramatically,” said sculptor Professor Ed Inks. “It’s become much stronger, much more conceptual and much more well thought out. He’s grown. He’s a very easy student to work with; very open and very willing to learn.”

“As an engineer, I used a lot of hard materials like steel and aluminum, copper bronze, plastics,” said McGinnis. “It was not until I really became a separate artist later, as a retired man, that I started working with stone and that allowed me to then work with a material that has a lot of interesting characteristics. When you’re working with steel and you make a mistake, well, you can weld it back on. Working with stone, it’s hard to weld that back on.”

McGinnis came to City College through the recommendation of his friend to further his education in sculpting.

“If I didn’t love what I was doing or occupied doing, then I left and went some place else and found somewhere else that gave me the opportunity to keep doing what I love doing. So I was never bored,” said McGinnis. “As soon as you get bored, you need to find some place else to be.”