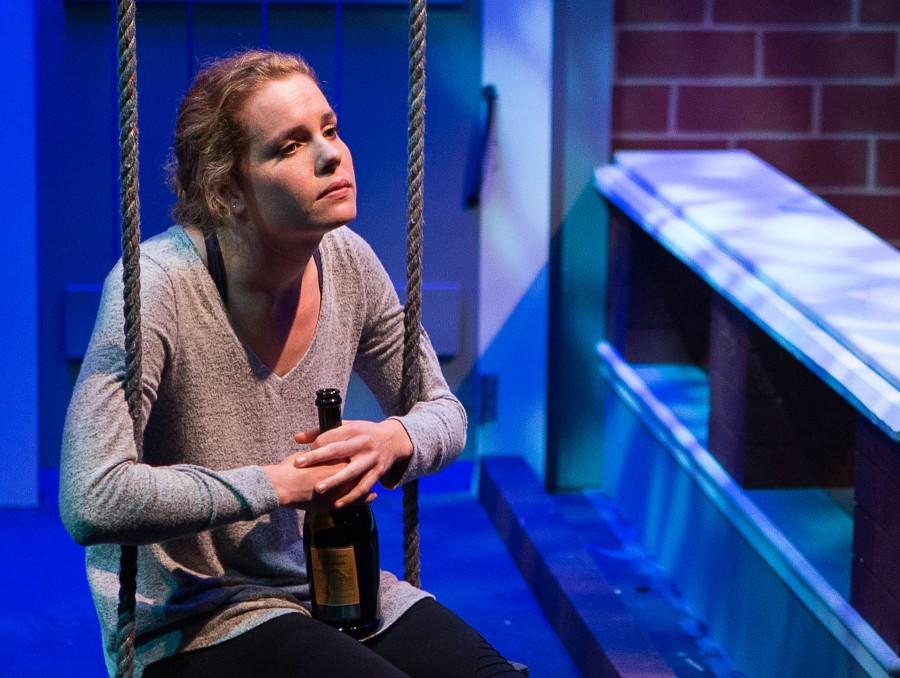 Katherine Bottoms embodies the mental struggles of her character Catherine during ‘Proof’ rehearsals, Thursday night, April 7, at the SBCC Jurkowitz Theater in Santa Barbara,. The play will premiere at 7:30 p.m. on Wednesday, April 13.

City College’s Theatre Group is bringing family dynamics and mental health awareness to the stage in its production, “Proof,” set to premiere Wednesday, April 13, in the Jurkowitz Theatre.

The plot is centered around Catherine, a young woman struggling to cope with her brilliant mathematician father’s passing. She’s also balancing her estranged sister, Claire, and the blossoming of a new relationship with her father’s former student, Hal, who is curious to find a richer meaning in her father’s 103 notebooks left behind.

“It is a story that works on a number of levels,” said R. Michael Gros, director and co-department chair of theatre arts. “The father is a certifiable genius who has suffered a mental illness of some form and one of the daughters has potentially inherited some of the qualities and traits of her father.”

According to the National Alliance on Mental Health, 50 percent of mental health illnesses will begin at age 14, while 75 percent of those mental health illnesses are developed by 24. Bipolar disorder can come at any age in life, but the general onset is 25 years old. On the other hand, schizophrenia can onset in a man’s early 20s, while women don’t usually have their onset until their late 20s or early 30s.

“In the play we celebrate her [Catherine’s] 25th birthday,” said Gros. “This is the onset of mental illnesses in our society. The onset time period is late teens to early adult years.”

City College alumna Katherine Bottoms portrays Catherine, and has played in previous shows put on by the Theatre Group like, “A Midsummer Night’s Dream,” “Present Laughter” and “The Heiress.”

“What really drew me to this show was the writing, most of all, just because of everyone’s roles,” said Bottoms. “It just sounds like you’re listening to real people talk.”

“There’s a lot of things that I feel with this character where she just wants to help,” said Gustafsson. “She just thinks this is the best, and that is a very sister thing to do. I feel where she’s coming from.”

Playwright David Auburn wrote the play in 2000 with its first performance premiering in May of that year. The production won two awards in 2001 and later became a film that premiered in September 2005.

“It won the Pulitzer Prize and the Tony Award,” said Gros. “It is a wonderful piece of theatrical writing.”

“At the core, it is a family play,” said Gros. “It is a play about a family unit, the father and two daughters and their relationship.”