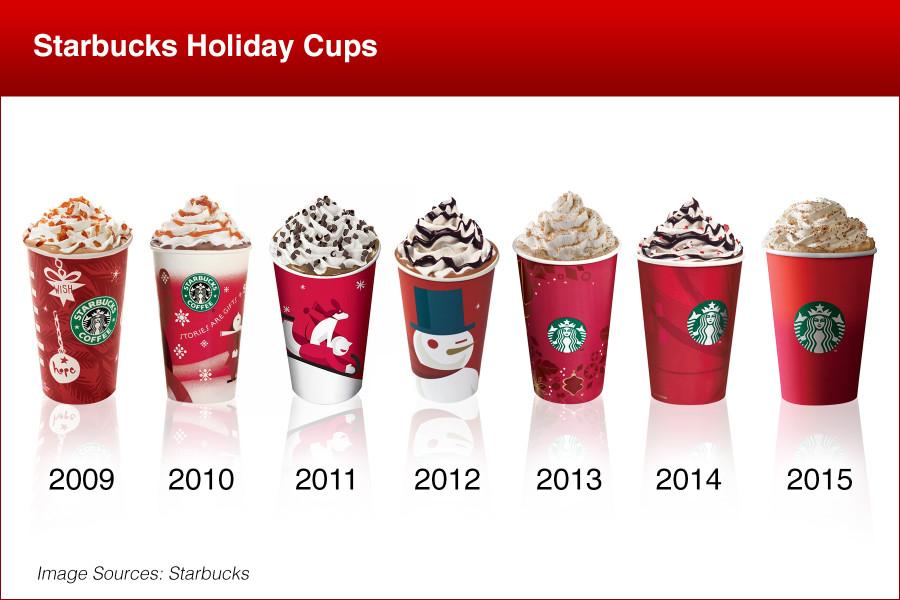 Controversy has erupted amongst religious extremists over this year’s Starbucks holiday themed cup, which features a plain and minimalistic red design along with the traditional Starbucks logo.

With the holiday’s season in full swing, stores and businesses are decorating to show their holiday cheer. Starbucks has been a strong and well-known participant in decorating for the winter holiday season.

Every year, Starbucks has released a line of coffee products from decorative coffee shaped ornaments, advent calendars and a holiday themed design for their disposable coffee cups. In previous years, their cups have had designs that include snowflakes, snowmen and even reindeers.

This year’s themed cup has sparked a viral outcry with religious extremists who express their dislike for the new, “non-holiday themed” cup. In efforts to publicize their opinion, many have been telling the baristas at Starbucks that their name is ‘Merry Christmas.’ This is then written on the cup, and it supposed to make it more Christmas themed.

The City College students have responded with general and mutual feelings towards this season’s Starbucks controversy. Some seem to find it either very confusing or simply comical.

“Honestly, I think that it is ridiculous,” said Kaelee Boussarie, anthropology major. “Starbucks was going for a minimalistic design, which is the current fad, and it is also ridiculous because the colors are green and red, which are Christmas colors. There’s no reason for them to be angry about colors.”

“I kind of understand the Christian’s reasoning’s, I am of the Christian faith,” said Pflaum. “Though, I do feel like they are making it a bigger deal than necessary. Starbucks isn’t trying to make this a personal offense against the Christians and it is still kind of Christmas themed. It is kind of funny how the Christians are showing their rebellion, it’s becoming very comical, at least to me.”

Many students are confused about the attention this issue has been getting from social media and why this is important to a religion.

“I think that this doesn’t really make any sense,” said psychology major Matthew Jones. “It is just simple colors. It obviously resembles Christmas even though there are a lot of different religions, so why would one religion be so angry with Starbucks having a different design. If you are Christian, why does a cup that you are buying from Starbucks affect your entire day? How does it affect your religion? It doesn’t really make sense.”

Others have questioned why Starbucks even needs to have a holiday themed cup.

“I think it’s pretty stupid. I feel they made it pretty general. It adheres to the holiday theme and it doesn’t have to have certain symbols to make that clear. Starbucks should just keep their original cups of green and white for the holidays, they don’t really need to change the design at all,” City College student Katie Chastain said.

Each year Starbucks experiences some form of social media controversy concerning their brand. The social media discussion has been given the trend hash tag #ItsJustACup and continues to stay on the media’s radar.