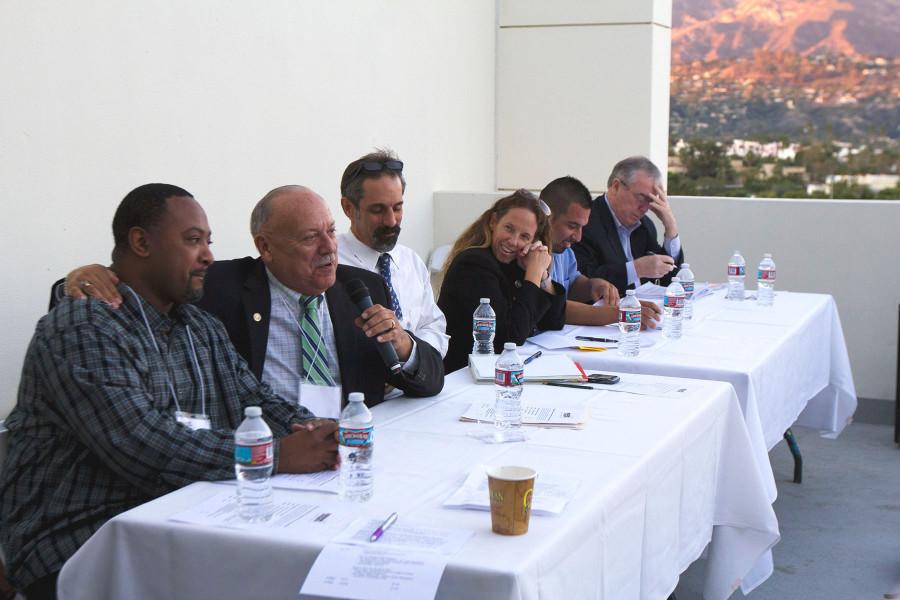 Juvenile solitary confinement was the topic of the discussion panel held at City College on Friday, Nov. 13 at the Atkinson Gallery. Speakers shared their personal experiences about isolation confined in a cell.

City College hosted an open discussion on campus to address the affects and experiences of people in the juvenile justice system.

“I’ve seen a lot of kids in trouble.” he said. “You can only imagine the impact [solitary confinement] can have on people.”

The panel was orchestrated by the Freedom4Youth organization that helps youths in the juvenile justice system grow into well-rounded individuals so they can be successful outside of confinement.

The attendants were served appetizers before they began to take their seats in the outdoor arrangement overlooking the hills of Santa Barbara.

The crowd became silent as Yaskin Solano, City College student and board member of Freedom4Youth, began the discussion. He started the panel by speaking about his past experience inside of a juvenile detention center. He described his experience as feeling extremely isolated even after he was released.

Solano is involved with Freedom4Youth and was introduced to the founder Billi Jo Starr at the Los Prietos Boys Camp where Solano was detained.

Judge Frank Ochoa followed, acknowledging how the lack of limitations for the use of solitary confinement is a main contributor to the issue.

“Sometimes a time-out is warranted for people and sometimes people need a break to think about what they are doing but there have to be limitations and that is what this legislation is about. It’s about providing limitations to isolation, monitoring isolation and controlling the circumstances,” Ochoa said.

Attorney Tara Haaland-Ford has met many youths who have been inside of solitary confinement for a long period of time, including a 15-year-old who was held in isolation for eight weeks.

As the night became colder the conversations from the panel became heated as Manny Raya, former inmate and philosophy professor at City College, discussed his views on isolation with immense passion.

Dr. Glenn Miller, child, adolescent and adult psychiatrist, spoke about the psychological effects of isolation and how isolation can severely damage a person’s psychological state.

“Isolation makes people who have never been challenged with mental disorders present as though they are mentally ill,” he said. “The type of paranoia and psychosis that occurs in stimuli deprivation for up to 23 hours of day causes people to present with a mental disability. It’s horrible.”

Co-Founder of Transitions Martin Leyva also accompanied the panel discussion and focused primarily on what the public can do to change the use of solitary confinement.

“We can change the way the government applies force to the people, we can make it better,” she said. “It’s our duty to provide a place that will shelter and protect our youths.”

Editors Note: A previous version of this article was published prior. The Channels apologizes for any confusion.