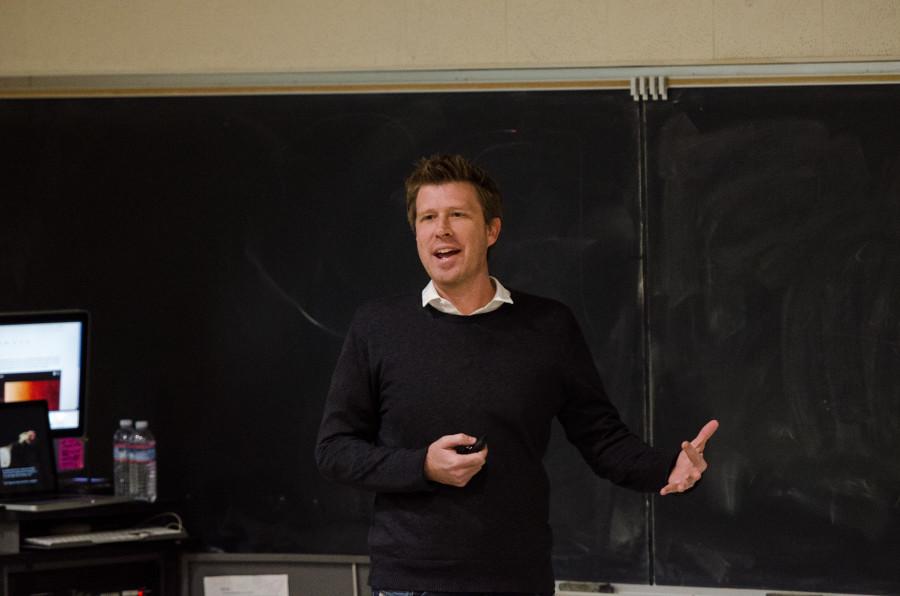 Andy Howell, a staff scientist at Las Cumbres Observatory Global Telescope Network and a part time physics instructor at UCSB, speaks on astronomy as a guest lecturer at City College on Thursday, Nov. 12, in the Physical Science Building on East Campus. The lecture comprised a part of his studies over the last 15 years on supernovae and dark energy. 'The best part about my job is being able to figure something out about the universe that no other human being has ever known,' Howell stated.

City College students and Astronomy Club members had the opportunity to listen to an engaging speech about the supernovas, dark matter and the universe on Nov. 12 in the Physical Science Building Room 101.

“Learn as much as you can while you’re a student,” said Howell for students interested in a career in astronomy. “You want to find out these new things that nobody in the world has ever known. To do that you need to work with the best people in the world.”

Howell is the head of supernovae group at Las Cumbres Online Global Telescope in Goleta, and was the host of the third season of the National Geographic Channel series, “Known Universe.” He was also apart of the Supernovae Cosmology Project, which was led by 2011 Nobel prize winner, Saul Perlmutter.

Many astronomy club members and students were in attendance, as well as students from several astronomy classes that were awarded extra credit for attending. The classroom, which is able to hold about 130 people, was full of students eagerly discussing astronomy.

“I came to this lecture today because I’m very interested in interstellar explosions in the sense of supernovas and black holes and stuff like that. I have always loved astronomy as a hobby,” said Troy Huff, marine mechanical engineering major.

In the lecture, Howell discussed satellites used by N.A.S.A. that were built to be spy satellites for the United States government. He also talked about the different types of telescopes he uses in the field and the purposes for each one.

“If you want to be able to observe things around the clock, you need to build telescopes all around the world; and that’s what we have done,” said Howell. “We’ve built a global robotic network of telescopes and put them around the world in longitudes so that it is always dark somewhere.”

Howell explained that the trend is to build large telescopes, to see far away and to observe distant galaxies, but it isn’t beneficial when things are changing rapidly which is why they started using robotic telescopes.

They put the telescopes all over the world, some are in the Canary Islands and Hawaii with another one being built in China.

Howell said that they have the southern ring of telescopes completed and they are working on the northern ring, which is contingent on funding.

“It’s a very interesting topic and I definitely think that it’s important for everybody to kind of understand how the universe works,” said Edward Dovzhansky, member of the astronomy club. “When I keep this thing at the back of my head, that we live in this beautiful universe it really puts some context into my life and it’s lifted me out of some dark places in the past.”