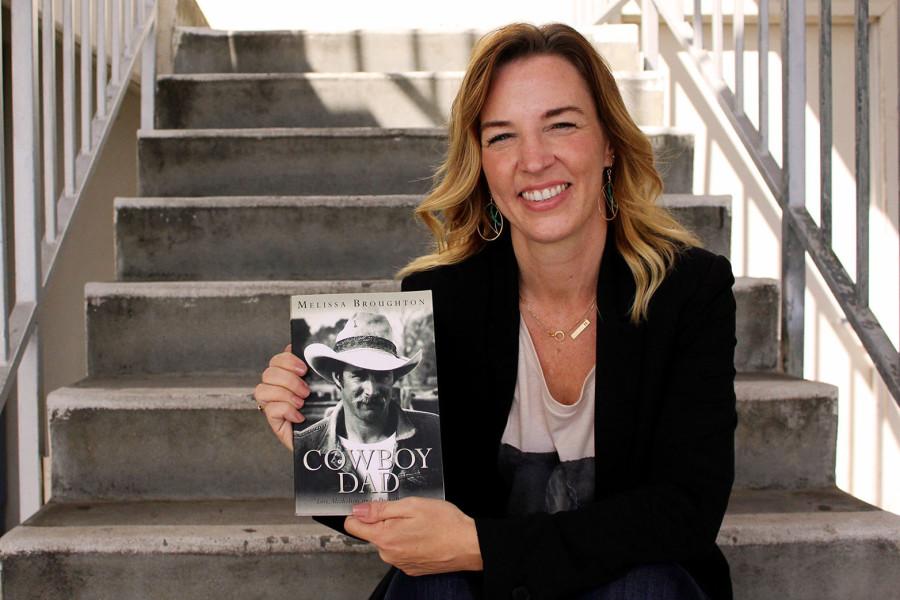 City College Alumni Melissa Broughton with her new book ‘Cowboy Dad,’ Thursday, Oct. 8, on East Campus. The author released her memoir June 2015, offering a candid look at her life with an alcoholic father as well as the lifestyle she led while living on a small town ranch.

In a heartbreaking collection of real life stories, City College Alumni Melissa Broughton writes about growing up with a father who suffered from alcoholism almost her whole life.

Published earlier this year, “Cowboy Dad” is a book made up of short stories from her past that bring up the good and not-so-good memories of her childhood and young adulthood.

The title refers to her father who raised her and her family on a ranch. He always wore a hat, jeans, and cowboy boots.

The book starts with a memory of her father leaving Santa Barbara after just one day of being in the Santa Barbara Rescue Mission Recovery Center. This would be the last time she spoke to him face-to-face as he felt that he did not belong and was out of place at the recovery center.

I was hooked after the first chapter because I could feel the emotions she expressed in her writing. That feeling of sorrow and anger can be felt as the father-daughter relationship was filled with disappointment.

I grew up in a somewhat sheltered household whose parents enrolled me in a private Catholic school at the early age of 5. Before reading this book, I did not have any experience or knowledge of what living in an alcoholic’s world was like.

The book brought me to experience her emotions and live in her world. Although it’s mainly about her father, she sheds light on her relationship with her best friend Kiley, and a few past romantic relationships.

Kiley, who was a wife and a mother, suffered from breast cancer in her early thirties. To spend time with her, Broughton would make several trips to their hometown in Colorado while she went through chemotherapy.

As she visited her lifelong companion, she felt that reality hit her. She came to the realization that the young woman she grew up with could die. Sadly, Kylie’s life was taken by what the doctors considered to be the most aggressive cancer they had ever seen in that young of an individual.

Kiley, early on in the book, became a favorite of mine. Her spunky and sassy attitude is what makes her so relatable to myself. When Broughton wrote of her passing, I found myself crying for a decent amount of time as I felt I could not go on with the book just yet. I was so emotionally invested in Kiley and Broughton’s relationship that I felt I lost someone close to me as well.

Just as I thought the heartbreak was over, Broughton’s father’s health started deteriorating fast. After years of having multiple seizures from drinking, he ended up in the hospital unconscious.

The hospital did not seem to have the resources to treat her father, so they ended up transferring him to another in Cheyenne, Wyoming. After two weeks of multiple seizures and heart attacks, Broughton had to make the devastating decision for the medical team to stop reviving him.

Her father passed away from alcoholism that afternoon.

Broughton is a very courageous individual. To be able to write a book about her past is exceptional and encouraging.

As someone who is strictly an article reader, this was an incredible book. It was heavy on the heart, but a very easy read. I would highly recommend picking up this book as I find myself wanting to read it twice.