A mixture of themes kicks off grand opening of ‘One Act’ 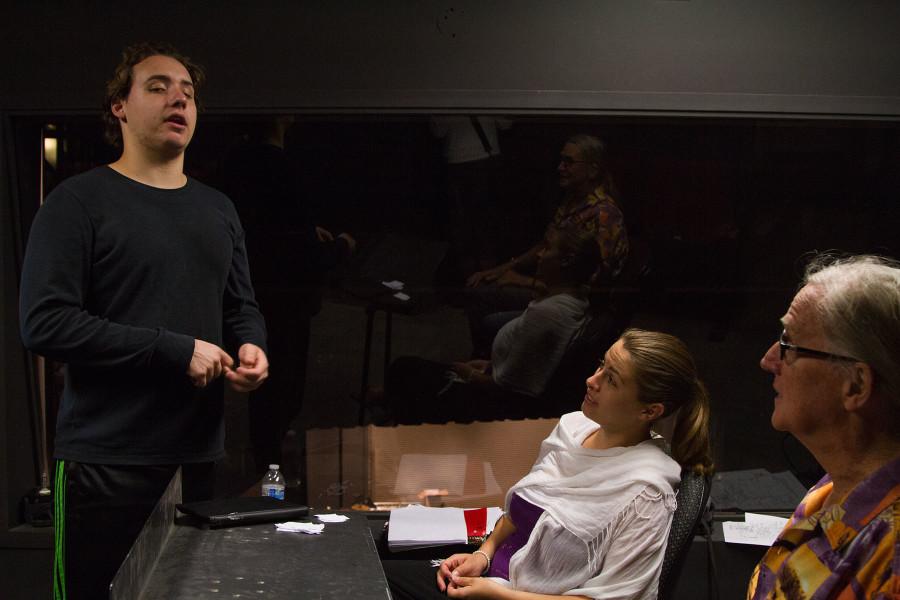 Advanced acting students (from left) Beau Jones, Britni Alleman, and Michael Thompson rehearse lines from 'The Philadelphia' in preparation for their performance in the 'One Acts' production, Monday, April 27, in a classroom above the Garvin Theatre on West Campus. 'One Acts' premieres Monday, May 4, at 7 p.m., and runs nightly through Saturday, May 9, in the Jurkowitz Theatre on West Campus.

Love, life, laughter, time travel and being stuck in an alternate reality were a few of the themes at City College’ short play festival, One Act which premiered Monday night at the Jurkowitz Theatre.

In the small, lightly packed and dimly lit Jurkowitz Theatre, the students in Advanced Acting took to the stage for their last performance. But one would never think of the crowd as slim based off of the roar of laughter throughout the night. Monday night’s show featured four very unique plays, “Women of Manhattan,” “The American Century,” “The Philadelphia” and “Sure Thing.”

One Act is considered to be the final exam for the students in the advanced acting class, the highest acting class offered at City College according to Maggie Mixsell, the course instructor and event coordinator. It is where the students showcase what they have learned while going through the acting program.

“I always say that the students learn more from one night performing to an audience than they do in class,” Mixsell said during her opening speech.

“Women of Manhattan,” a comedic play directed by Kristina Coggins, is about three women and their different views on love. Billie wants to get out of her boring married life and live an adventurous one. Rhonda is still trying to get over her past lover, and Judy is struggling to just find a man since her previous lovers all turned out to be gay.

Although all three have very different personalities, they feed off each other nicely bouncing funny one-liners back and forth causing the crowd to laugh. “We are all friends outside of the class,” Lovisa Bergman who played Rhonda, said, “so we are always with each other.”

“The Philadelphia,” directed by Pacomio Sun, is about a man who gets stuck in The Philadelphia, a hole in reality where things never go one’s way. If ever he wants anything he has to request the opposite: if he wants a water, he tells the waiter he isn’t thirsty.

“Sure Thing,” also directed by Sun who also has a role in the play, jokes about how people put on a front in order to appeal to others. Bill and Betty, the two main characters, meet for the first time and have a conversation. Whenever one of them doesn’t like what was said, they ring a bell that takes them back a few seconds so they can change their answers.

Time travel was also a theme in “The American Century,” directed by Jenna Scanlon. After a man returns home from World War II to his young wife, their son from the future appears. After describing how he got there and the life that he has had, the couple slowly start realizing that all the hopes and dreams that they had for the future do not pan out.

Their kids resent them, the father forms a drinking problem and eventually goes broke, the mother goes to rehab and then gets cancer and the play takes a dark turn. However, Samantha Wierick is comic relief as a somewhat ditzy but positive-thinking mother and does a great job at lightening up the play when it starts to go dark. “Comedy comes a little easier than serious parts,” Wierick said. “I kind of a goofy person, so it all works out.”

Originally from Texas, Wierick is graduating this year along with many of her fellow peers and is going to move to Los Angeles to work in the acting industry.

The One Act festival is running throughout the week until Saturday at the Jurkowitz Theatre. All shows start at 7 p.m and are free to students with a student ID and $5 to the public.