Acting students showcase “One Acts” in the Jurkowitz Theatre 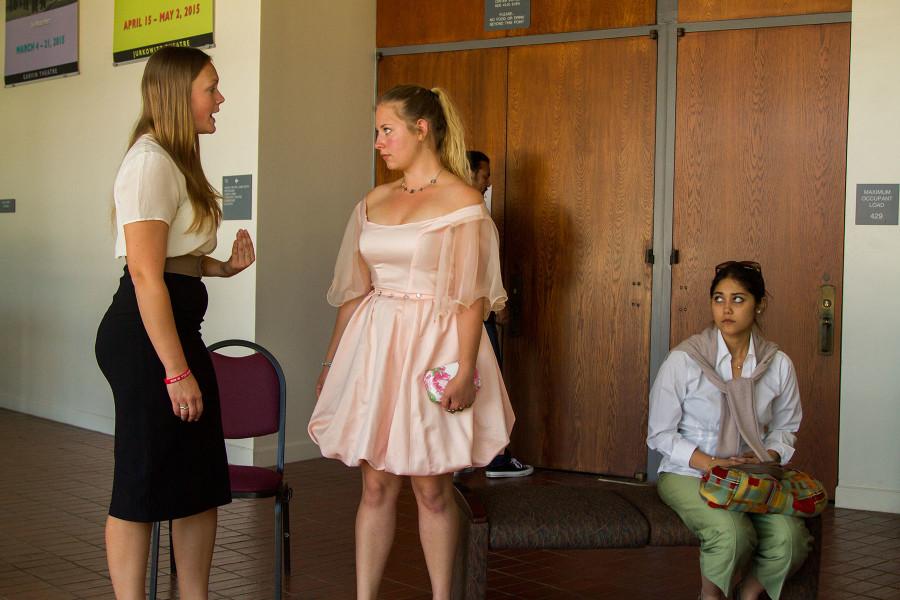 Advanced acting students (from left) Sara Weman, Sara Persson and Laksmini Wiyantini rehearse lines for their upcoming performances in the City College student showcase ‘One Acts,’ while behind them former acting student and current director Pacomio Sun enters the Theatre, Monday, April 27, in the Garvin Theatre lobby on West Campus. Persson, Weman and Wiyantini are performing an act from ‘Approaching Lavendar,’ and Sun is directing ‘Philadelphia.’

The final curtain is closing for the advanced acting students in City College’s theater department, and for many it is their last.

“One Acts,” an annual student showcase has highlighted the talents of advanced acting students throughout the community.

Starting 7 p.m. Monday, May 4, at the Jurkowitz Theatre, actors will perform short skits around 20 to 30 minutes long.

Advanced acting teacher Maggie Mixsell says the show is usually put together by students of the advanced directing class. But this year that class does not exist, so instead Mixsell invited seven directors that are former students from around the community.

The show is of full performances, which differ from the scene practice that the actors normally do in the class.

“Normally it is just a scene, so it is nice to do this for their last show,” said Mixsell.

Auditions for the show started March 16, where the actors had to recite two theatrical monologues of their choice to all the directors. Casting started two days following and since then, rehearsals have been constant.

“The actors meet three times a week for scheduled class time to rehearse, but everyone does much more than that,” Mixsell said.

With the advanced acting class being the highest acting class that the college offers and for a lot of them, this is where the road ends.

“I am a bit sad that it is ending, but even though I can’t act next semester, I am going to try and stay involved in the program. Maybe be a teacher’s assistant,” said Sara Persson, an actor in the show.

Opening night starts off with four acts, “Women of Manhattan,” directed by Kristina Coggins, “The American Century,” by Jenna Scahlin, and two shorter acts titled “Philadelphia” and “Sure Thing” directed by Pacomio Sun.

Monday and Thursday night will consist of the same four acts, as well as Tuesday and Friday night. Wednesday and Saturday is one full-length play but with three different directors and three different sets of actors.

Being their last performance at their high skill level, Mixsell said that she tends to mostly leave the actors alone, and only talking to the directors to discuss notes. By doing this Mixsell said, “it helps the actors grow into a more professional form of craft.” She prefers to be in the background, ensuring her and the directors only have one voice.

All shows are set to start at 7 p.m. at The Jurkowitz Theatre. It is free for students and $5 for everyone else.