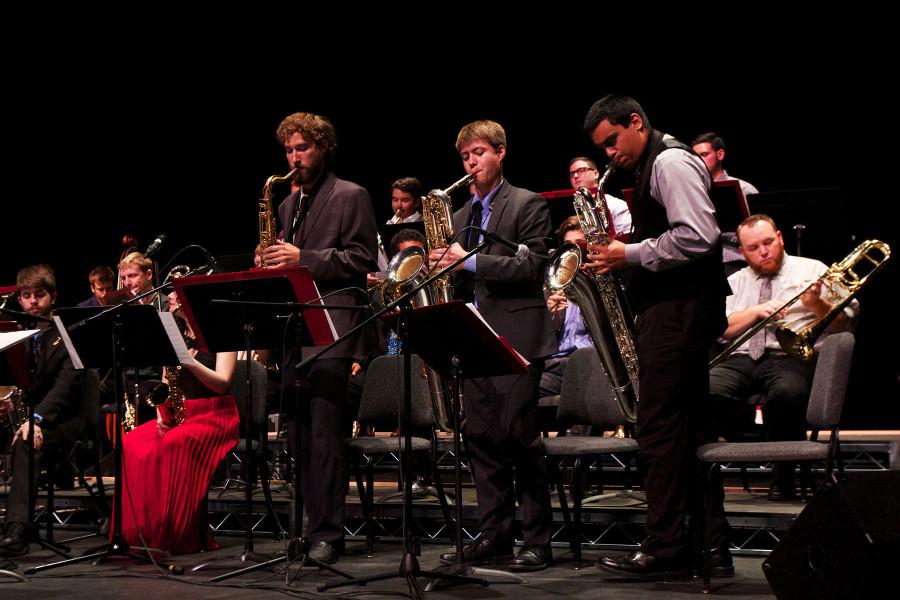 From the smooth style of the west coast to the classic tune that pays tribute to the city that never sleeps, the Big Band Blowout wailed on their saxophones, and slammed on the piano keys to jazz scores from decades of history

” directed by Jim Mooy and “Monday Madness” directed by Isaac Jenkins. The groups members consisted of both City College students and faculty, many of them not just playing in one band.

Amanda Moran, a saxophonist for “Good Times,” was featured in numerous pieces throughout the set. Moran is a member of all three of the bands that played in the concert. She plays the alto saxaphone, soprano saxaphone, as well as the jazz flute. “Playing in all three bands is challenging,” Moran said. “It is hard decided what to prioritize but it is a lot of fun.”

The second act “Lunch Break” which is directed by Mooy kicked off their set by a horn led Sammy Nestico classic “Freckle Face.” After playing a lot of fast paced horn driven songs for most of the set, which even featured a vocal performance by Monday Madness’ drummer Kevin Winard for “Theme from New York, New York,” pianist Benjamin Huston ended with a groovy piano solo in Ray Brown’s “Neverbird.”

“Lunch Break,” along with “Good Times” had just returned from Nevada this past weekend from the Reno Jazz Festival. “Lunch Break” received a score of straight ones which is the highest award to receive at the competition. Moran was also a recipient of an individual award for best Outstanding Soloist.

to “Lunch Break’s” director Mooy, at Reno the group had to play their set in front of the judges at a start time of 7:30am. But even though they had an early start Mooy said the group was, “Swinging as hard as a gate in a hurricane, even at 7:30 in the morning.”

The final act to perform was City College’s all pro group “Monday Madness.” It consists of many professional students and staff including fellow director Eric Heidner who plays Trombone. Directed by Jenkins and having guest drummer Kevin Winard keeping the beat the group ended the night with fast challenging numbers

, really showcasing each section of the bands talents.

With loud saxaphone solos from Justin Claveria, Andrew Martinez, Amanda Moran and a quick fingered piano solo from George Friedenthal, the group really ended the the last performance of the year with a banger.

City College’s big jazz band’s are finished for the semester but the music department’s other bands will be having performance’s up until finals week. A schedule of the performances can be found