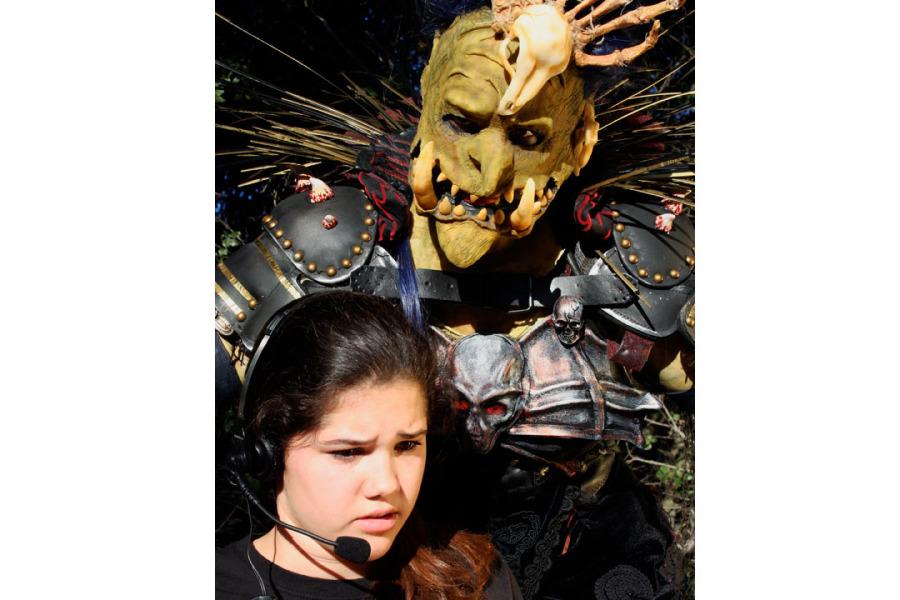 The student production “Ten Red Kings” invites the audience to uncover the destructive behavior that leads to addiction and explores the escape from reality through video games.

The play premiered on Thursday, Nov. 14, in the Jurkowitz Theatre. Directed by City College theatre professor, Michael Gros, who did a great job directing the student production— although there were some dissatisfactions.

“Ten Red Kings” written by Mark Rigney explores the escape of a young woman, Margot Cates played by Sabrina Wagner. Instead of facing the reality of her sister’s death, she engulfs herself in video games and becomes obsessed with “World of Warcraft.”

It is through the avatars of the digital world that Margot finds comfort and security, until her parent’s decide to whisk her away to a boot camp for video game addicts.

At the camp she meets five other people, tough yet lovable Stevie (Stephanie) Gallagher played by Drew Anderson, Keith Moss is convinced the zombies are real and that the world is ending. Paula Gonzales is the only character that admits she needs help, played by Swedish international student Vera Olin whose American accent was impeccable.

Margot also meets Donovan Kuebler, a narcissistic character that loves sports played by Morgan Darnall and Joey Rucci, the boy who has his mind on only two things, video games and food. All of the six character struggle with the same battle but they choose to tackle it differently. Friendships are made, lovers meet and dark secrets are revealed, drawing people in on a very modern addiction amongst youngsters in today’s society.

Upon entering the theater the audience was met with two wooden benches placed around a well, a small room with two computers. One photo was of a young woman next to it and zombies. The dead creatures started to appear one by one minutes before the show started. These creatures, characters from the online game “Dead Rising,” were dragging their feet, grunting and looking at the audience in search of brains.

The zombies set the mood for the audience and gave a peak of what one might expect from the play, a very engaging start.

The student production showcased many promising actors but one actor that left me a bit unsatisfied and wanting more was Sabrina Wagner who played Margot. Some of the scenes seemed a bit artificial and her tactics for her character were not clearly portrayed. Wagner did redeem herself in the second act, playing the role of a young adolescent’s journey through grief and reality.

City College student Hannah Wade portrayed the Night watcher, a creature from the video game “World of Warcraft.” Wade was the scene-stealer of the show, dressed in boots and dark clothes—and managed to grasp the character’s poise and fearfulness of her character.

Wade formed a dynamic duo with her fellow cast mate Varleigh, played by Lazer Friedman, a magician from the video game. The duo served as the play’s comic relief, exchanging rapid and witty lines like a Ping-Pong ball that bounces back and forth.

The production team and technician deserve a big standing ovation for creating a very realistic environment, switching from cabins by the woods were the six character’s plot mostly took place to the enchanted forest of “World of Warcraft.” A big screen was featured on stage, changing background images as the story of the play unraveled. This turned out to be a handful tool for the viewers who were able to witness an easy transition from reality to fantasy.

To see “Ten Red Kings,” visit the theatre group’s website. Tickets are $8 for students and $13 for seniors. The Play will run through Nov. 22, in the Jurkowitz Theatre.