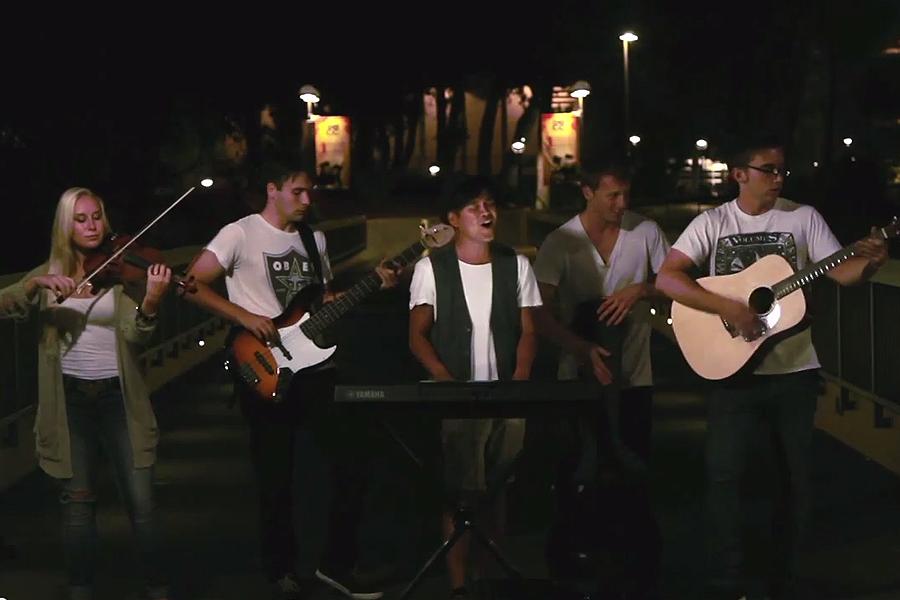 As the lights dim, the crowd buzzes with anticipation as they wait for the City College originated band “Surprise Me” to finally hit the stage.

Spotlights gleam down on their faces to reveal geometric face makeup— a reference to their album artwork. As their bodies sway to every note, the building fills with a sound like no other.

“Being on stage is definitely an adrenaline rush, sometimes you don’t even know what’s going on, it’s just a bunch of screaming and lights in your face,” said electric violinist, Carmalisa Reichhart. “You have got to be in the moment, otherwise you won’t connect with the crowd.”

“Surprise Me” performed their first headlining show on Thursday, Oct. 30 at SOhO restaurant and music club and are on the verge of completing their first studio album which will be coming out soon.

“Surprise Me” is following the footsteps of many talented alumni from the City College music program, including Katy Perry, Crosby Loggins and Tim Lopez of the Plain White T’s.

With not a single hair out of place, and his white Hawaiian shirt glowing on stage, the 23-year-old Swedish native began to show the crowd a band that owned the stage. Jorquia began his musical journey on a soccer field, where he would sing his heart out during soccer practice at the age of 14. It was his team that eventually signed him up for a local singing contest in front of a 300-person audience. He knew then and there he was meant to sing.

Lately, he has been working on recording the bands first album using his home studio – along with taking classes at City College.

Her green face makeup sparkles on stage, while elegantly moving the bow to create a sweet sound from her glassy light-up electric violin.

The 20-year-old, Carmalisa Reichhart started her music career when she was nine years old when her mother pushed her to start playing an instrument. She has been playing the violin for 16 years now and has played various other string instruments including the viola, cello and bass.

As he throws the drumsticks in the air, he swiftly catches them in his hands and continues to rock. The 21-year-old drummer, Dex Sullivan, got his musical calling at the age of ten after his mother introduced him to the piano. The Atascadero resident quickly decided that it wasn’t the instrument for him and he then picked up the drums – which he has been playing ever since.

“I have heard Joveth and Carmalisa play together a few times and they make a great team and accompany each other beautifully,” said Xenia Flores, a fellow City College music student. “They all bring something special to the group.”

Flores was one of three openers for the “Surprise Me” headliner show at SOhO. She has also played alongside some of the members at previous shows.

Guitarist, Julian Hall, a 20-year-old Santa Barbara native discovered he was destined to play the guitar after he was inspired by the movie, “School of Rock,” at the age of ten. Hall has also played in several City College shows, solos and has performed around Santa Barbara.

The 22-year-old bassist from Los Angeles, Michael Bell learned how to play the bass at 13. He was encouraged by his dad to start playing and finally got him lessons in order to do so.

With their growing fan base, “Surprise Me” has played at several venues in the local area and hopes to, one day, start touring around at festivals.

“It doesn’t matter how big the crowd is, as long as we perform,” said Jorquia. “…My dream is as soon as we’re done with the album, I hope to send it out to a bunch of record companies and other festivals that have the opportunity to let new band’s come in.”

“Surprise Me” has achieved all of this on their own, writing songs, booking venues and not to mention recording their first album.

“It’s like a workout, you have to keep working out to get better and see improvements. Then it gets easier,” said Reichhart.

Their next performance will be at the City College show “Music Now,” Nov. 14, 7 p.m. in the Garvin Theatre.

Amid the screaming, flickering candles and drinks coming from the bar, the band’s excitement radiated off the stage as the show came to a close. They lived up to their name “Surprise Me.”