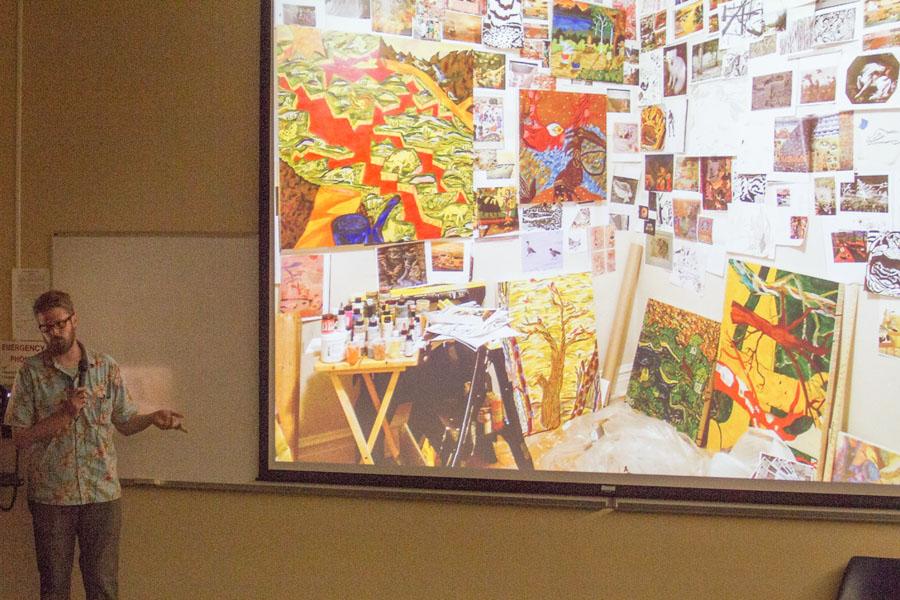 Carl Baratta shares his works of art in his lecture on Friday, Oct. 24, in Santa Barbara, Calif. as part of the “Art Lecture Series,” presented by the Atkinson Gallery. The abstract artist shares his studio space where collaged images scatter the walls. “This is like the inside of my brain,” said Baratta.

On Friday afternoon inside the Administration building, Baratta spoke about his use of egg tempera and his fascination with painting murders.

Baratta’s paintings take one into the world of bright colors and abstract ideas— filling the mind with blood, yet very exciting imagery.

The artist has a fascination with peculiar things, such as beheading, collage sketches, and metaphysical figures.

In his 2005 painting, “Magic Blood Bath,” Baratta uses watercolor, gouache and ink on paper to create vibrant imagery that consumes the 22” by 30” inch canvas. A miniature figure is seen holding up a sharp object with magenta-colored blood splattered on his neat white pantsuit.

In photos shown by Baratta in the lecture, he lets viewers see the inside of his studio— which is filled with collaged pictures that overwhelm the average person’s mind.

“This is like the inside of my brain,” said Baratta, laughing. “This is how I work, I hang up everything… everything.”

Materials are a vital part in Baratta’s works of art. He not only (usually) paints on a flat surface but also uses something called absorbent ground, which disperses pigment, allowing watercolor washes to create a distinctive type of effect.

Alchemy, elongated tree branches and miniature figures are all encompassing to Baratta’s body of work. His lecture started from past paintings up to the present. As well as speaking about his collaborative works with artists like Oli Watt, who is an assistant professor at the School of the Art Institute of Chicago— where he teaches print media and fine arts.

Baratta spoke highly of Watt and said he is “technically amazing but does not want to draw.”

In the collaborate pieces created by the pair, over-sized wood block prints were produced. “Loud River!” is one of those pieces— in the 24” by 24” inch piece, abstract mountains and trees consume the print. A strange monkey-like animal and a bird perched on a branch are accompanied by what seems to be fish with only their bones visible.

“They can get pretty hectic,” the artist said.

The use of egg tempera did not come about until Baratta wanted to get more out of his paints. Originally trained using oil colors, his work has evolved from watercolor, to washes, to using abstract forms and mediums.

Egg tempera is a fast-drying painting medium that is mixed with a water-soluble material, in this case, egg yolks— to create an overlay of bright pigmentation.

The reason for switching from oil paint to this type of medium was because he had felt that he had “too many rules” that had accumulated about the process and procedure of using oil paints.

“I go through so many eggs it’s ridiculous,” said Baratta. “I’ve gotten so good at making lemon meringue,” with the left over egg whites.