International Students engulf themselves in the theatre world 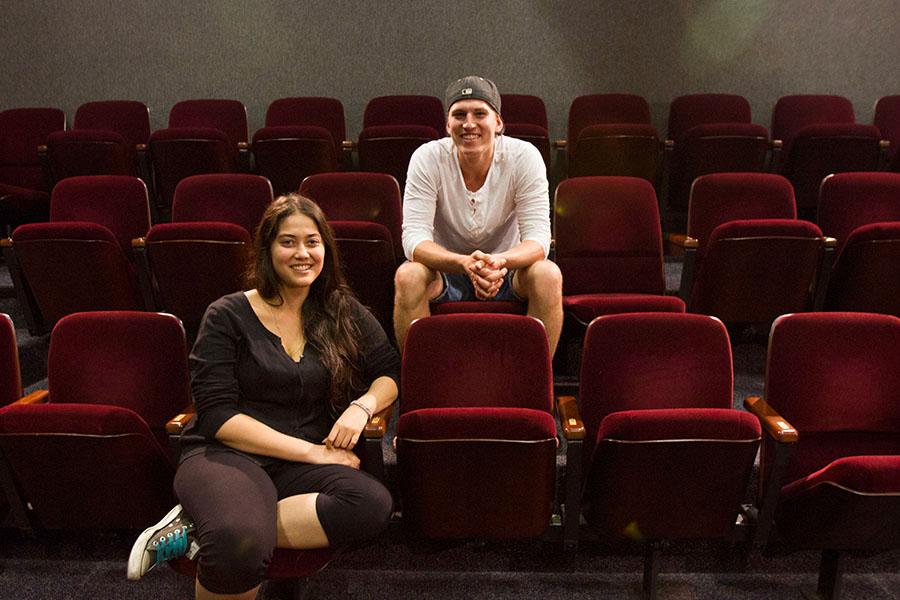 City College international students Joakim Leopold (right), from Sweden, and Ita Laksmini Wiyantini, from Bali, Indonesia, are majoring in theater arts, and hang out in the Garvin Theatre Tuesday, Oct. 14, at Santa Barbara (Calif.) City College. Joakim’s dream is to be a movie star, and Laksmini wants to be a part of a sitcom series.

When international students Ita Laksmini Wiyantini, 20, and Joakim Leopold, 19, decided to leave their nest and spread their wings, they flew all the way to Santa Barbara to attend City College and pursue their mutual dream of becoming professional actors.

Wiyantini has already encountered a few cultural differences but nothing surprised her more than the teachers at City College.

“The teachers here actually know your name, they will work with you one on one,” Wiyantini explained. “That doesn’t happen in Italy or Indonesia.”

For Leopold, who had worked as a chef back home in Sweden, he found the American Cuisine very peculiar.

“They have a lot of bacon and cheese on their food. People here eat a lot of junk food,” said Leopold.

It took both students some time before they dared to commit to a profession that most people have dreamt of becoming once in their life. In Wiyantini’s case, she never intended to major in theatre. Her original plan was to study languages, which she did, after graduating high school she moved to Venice, Italy.

“I studied Spanish and French for a year,” Wiyantini said, whom is fluent in Italian, Balinese and English. “…I didn’t like it, but I was afraid to tell people so I stuck with it for a year.”

She finally gathered the courage to tell her family who met her with support and love on her decision to chase her real passion.

“Don’t hold back and think ok I’m going to stay here because people expect me to, it’s too big,” Wiyantini advised. “Talk to people, they will help you out.”

Just like Wiyantini, Swedish student Leopold went through many changes and conclusions that led him to coming to City College. He attended a theatre program in high school but had to quit after he found himself at default to provide funding. He switched schools to study culinary instead, but his passion for acting never died. Leopold has his mother to thank for stumbling upon his love for acting, whom made him take acting classes when he was six.

However, his biggest challenge was and remains to be the English language. Unlike the average student in Sweden, who begins their English studies in third grade, Leopold had to catch up with the language much later than the rest.

This is Wiyantini’s second semester and after attending her very first audition, she was offered the part as an understudy in the student production of “Ten Red Kings.”

Having started his first semester at City College this fall, Leopold has kept himself busy with auditions as well, his most recent being a film project starring “Grease” director, Randal Kleiser.

In the future, Wiyantini pictures herself going back to her native country, Indonesia.

“I see myself going back to Bali, working with traditional theatre and trying to keep it alive by bringing what I have learned about western theatre,” said Wiyantini.

Although she admits that in an ideal world she would love to star in a sitcom or movie and wouldn’t mind if Benedict Cumberbatch (TV Series “Sherlock Holmes,” “12 Years a Slave”) was there with her as part of the cast.

Leopold sees a different future for himself and wishes to go to Los Angeles and become a movie star. He hopes to star in a film directed by Johnny Depp and have Swedish “True Blood” actor, Alexander Skarsgård, act with him.

“I want to do films in the future, make it big in Hollywood,” admitted Leopold.

Both international students are happy they figured out what they want to do with their lives and see City College as their first step into becoming a professional actor, whether it is on stage or film.