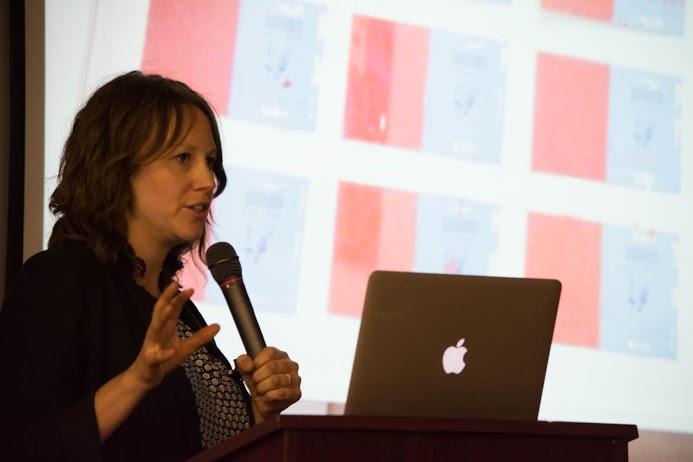 “Every life should become part of art and art shouldn’t be restricted to a gallery or traditional viewing spaces,” said Los Angeles gallery owner and juror for the Atkinson’s Gallery’s “Small images” exhibit, Tif Sigfrids.

A small crowd that consisted of art major students from City College and art enthusiasts gathered at 4 p.m. on Friday, Oct. 3, inside the Admissions building to hear Sigfrids talk about her trendy gallery in L.A.

The gallery owner spoke about her career, as well as collaborations she has done with past artists, one of them being the conceptual artist Joe Sola and experimental artist Albert Mertz.

She managed to gain both admiration and amusement from the audience when she showed pictures from “Portraits: An Exhibition In Tif Sigfrids Ear,” her first exhibit she did in her own gallery with artist Joe Sola.

Sola came up with a rather peculiar idea to host an art show in Sigfrids ear, literally. While many would raise their eyebrows by just reading the last sentences but the exhibit was precisely that. Six microscopic portraits that fit inside a small gallery nestled in Sigfrids’s ear.

“It wasn’t very comfortable to wear,” Sigfrids explained. Sola created multiple miniscule sculptures that could fit in Sigfrids ears with the help of a microscope and a 12mm acupunctured needle.

“The fact it is so small is interesting. Even if it didn’t work, the process itself is artistic,” said Anke Gladnick, a City College student currently majoring in Studio Art.

At the end of the lecture when an audience member asked Sigfrids if she would do a nose portrait in the future, she responded, “I hope I don’t have to put stuff in my body again.”

Sigfrids opened her first exhibition in her own gallery in 2013. She was previously the director of the “Tom Solomon” gallery in Los Angeles. It was here, at the gallery that she displayed miniature paintings and artwork on her desk. The audience saw pictures of a variety of artwork being displayed on an Ikea desk protected with a thick Plexiglas on top. She initiated the project space “Tif’s Desk”, a series of regularly rotating exhibitions that took place inside of the desk she worked from.

“It really began its own thing, the desk had its own group of followers and the gallery had its own, when really it was all in the same place,” said Sigfrids.

It is experiences like this that according to the director of Atkinson Gallery, Sarah Cunningham, makes Sigfrids a great juror for the Atkinson’s Gallery thirtieth “Small images” exhibition, a juried show featuring regional artists working with all mediums.
“She is somebody who repeatedly has been looking at small images in her own practice,” said Cunningham.

Sigfrids appeared humble and enthusiastic about the opening of the “Small Images.” She explained how she chose 39 pieces from almost 400 that were submitted by students and other artist from Santa Barbara, which were later featured at Atkinson Gallery, shortly after her lecture.

“I don’t claim to be an expert in small art but it is true that I have dealt with it a few times,” Sigfrids explained.