Escape from reality, into the theater with ‘Ten Red Kings’ 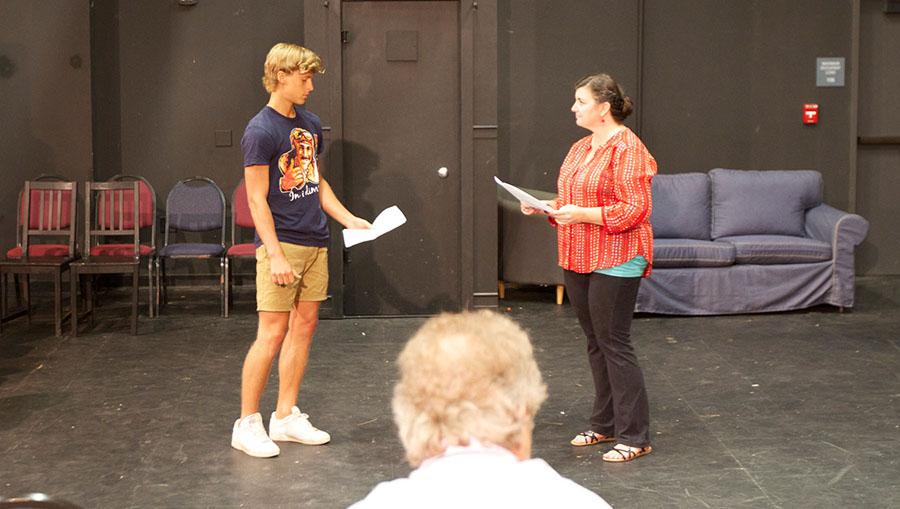 Julius Martin performs his scene with Mahealani Ciabattoni for Michael Gros, auditioning for the student showcase production 'Ten Red Kings,' on Tuesday, Sept. 9, in the Jurkowitz theatre at City College. The play premiers on Wednesday, Nov. 12.

Young actors were seen apprehensively fighting on September 8 for a part in the premiere of the student showcase production “Ten Red Kings,” written by Mark Rigney and directed by City College’s theater instructor Michael Gros at the Jurkowitz Theater.

The atmosphere outside of the theater was thick with anticipation and anxiety. However, Waldo Damaso-Figueroa, was optimistic as he awaited his turn to audition.

“If I didn’t get the part, it was still worth it,” said Damaso-Figueroa.
Damaso-Figueroa is in his third year at City College, majoring in theater. He recalled the director Michael Gros as his first official drama teacher. Damaso-Figueroa sympathized with the timid and gourmand character in the play, Joey Rucci, and chose to audition for the role.

“Before entering to an audition, I’m thinking, don’t screw up!” said Damaso-Figueroa jokingly.

“Ten Red Kings” will feature music, dance and live action avatars that become part of the on-stage action. Alongside all of the hysterics, join several trolls and a smitten wizard who become enchanted with the nightwatcher of the play.

The main character is Margot Cates, a college student who becomes a skilled World of Warcraft player after her sister’s death and is whiskered away to a camp for online addicts.

The play illustrates how electronic devices become an escape for many of the characters and how some of them lose touch with reality.

Many of the actors could relate to the addiction and dependence on electronic devices, like student Caesar Franco, who auditioned for the role of Keith Moss. Franco was drawn towards the vulnerability and the constant dread that the character feels throughout the play.

“I am a video game addict, because I am on my phone 24/7,” said Franco
He said that the trick to perform better during an audition is to take two deep breaths before entering.
On Tuesday, Sept. 16, it was announced that the actors playing the lead roles were Caesar Franco as Keith Moss, Sabrina Wagner as Margot Cates and Drew Anderson as Stephanie ”Stevie” Gallagher, the mocking and feisty character of the play.

“Ten Red Kings” will debut November 12 and will run through November 22, in the Jurkowitz Theater at City College. Tickets are on sale and can be purchased at the www.theatergroupsbcc.com or at the box office located on West Campus at City College.