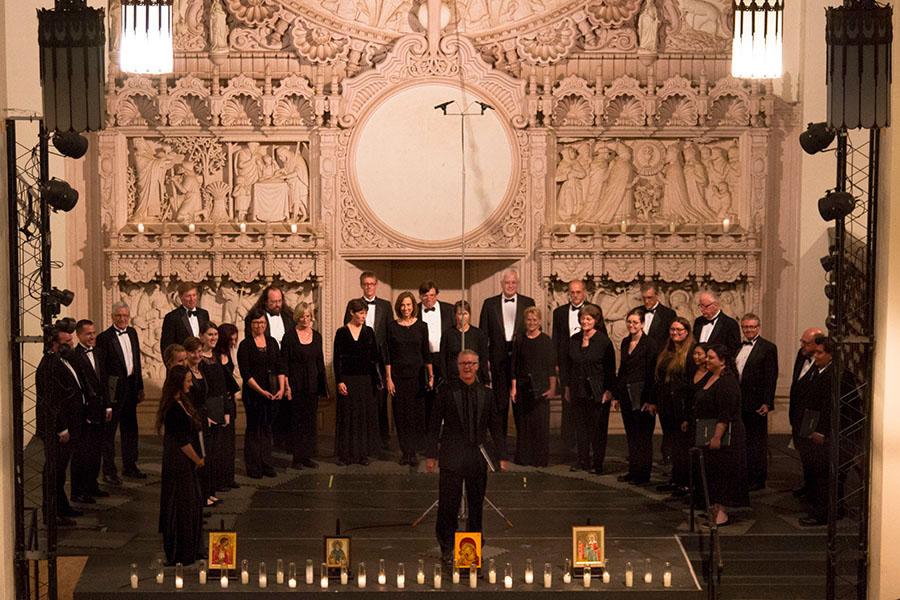 City College’s, Quire Of Voices, Artistic Director, Nathan Kreitzer, introduces the A Cappella choir members on Saturday, April 26, 2014, at St. Anthony’s Seminary on the grounds of the historical Santa Barbara Mission. This is the final concert of the season for the Quire of Voyces, who is celebrating twenty years of performing.

Quire of Voyces executed perfect harmonies in a night of Songs from Ancient Lands at St. Anthony’s Seminary of Garden Street Academy on Saturday evening.

The prestigious Santa Barbara based group is a part of the music department and the most advanced of the three City College choirs. It is composed of 30 talented vocalists under the direction of Nathan Kreitzer.

Seats began to fill moments before 7 p.m. at the beautiful chapel. White candles were arranged around and on the stage providing the perfect ambient lighting for the show.

The first piece, Count Alexander Dmitrievich Sheremetev’s, “Now the Powers of Heaven,” provided perfect foreshadowing for the rest of the show. The singers organically walked onto the stage, taking each position in an almost perfect semi circle, and performed the short piece almost effortlessly.

The following work, “Sacred Love,” from Three Choruses by Georgy Sviridov featured the cutting strong soprano voice of Nichole Dechaine, while the other singers provided a background that sounded almost instrumental, however, the entire show was a cappella.

The last piece of the night was “All-Night Vigil, Opus 37,” by Sergei Rachmaninoff, a choral symphony composed of 15 different parts.

The first three segments were greatly dynamic. The first was of joyful manner; the lyrics spoke of gathering others to worship together. The latter of the two, a song of worship, began with a deeper tone, then escalated into a higher range and then came back down in a wave-like fashion. The third part was the first relatively long piece of the night and was flawlessly executed.

All songs were performed in Russian so programs provided original lyrics as well as a word for word translation of the songs so audience members could follow along easily.

Stand out tenor vocalist, Bryan Lane, was the soloist during the fourth part, a song of adoration. The calming tone of his voice in the already soothing piece was a great recipe for relaxation.

The fifth part highlighted soloist tenor, Temmo Korisheli, in a piece that sounded like a duet between him and the other singers.

The last three parts before intermission contrasted each other perfectly. The first, part six, a joyful song about virgin Mary followed by an almost chaotic, but still very organized, seventh part followed by a lively eighth.

After the intermission were lengthier parts nine through twelve. Quire of Voyces’ ability to listen to each other and communicate was evident as they gracefully transitioned from piece to piece with barely any interruption.

The show ended with the three final parts, which were shorter and more upbeat as they ended the fifteen-part vigil in rejoicing the resurrection.

The audience was more than congratulatory as the choir walked down the aisle in pairs making a grand exit to finish up a great harmonic show.

Quire of Voyces will be performing the great cathedral classics again at 3 p.m. Sunday, April 27 at St. Anthony’s Seminary, $20 general and $15 students and seniors.