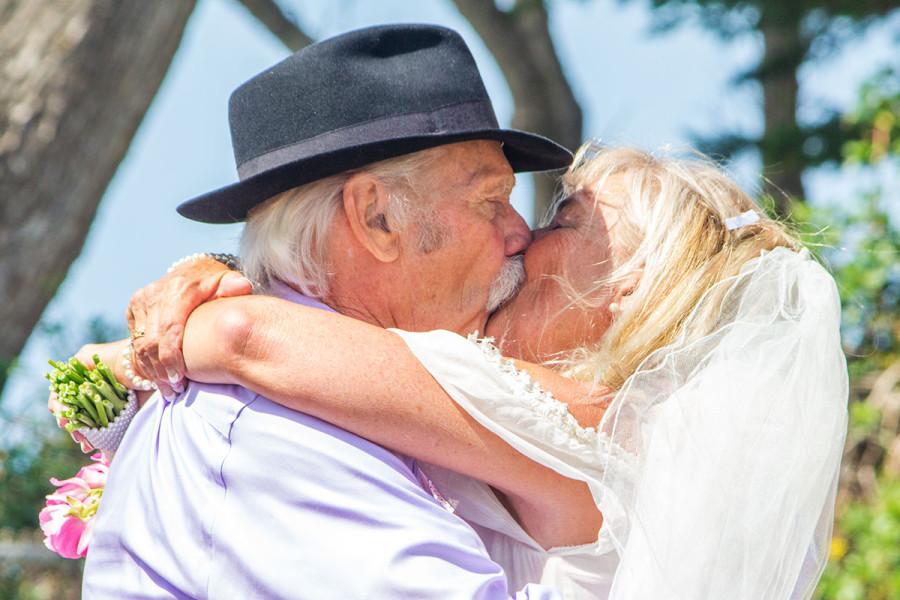 Mike Wheeler, 80, and Gail Shaughnessy share their ceremonial kiss on Saturday, April 19. Their wedding ceremony was held at Shoreline Park.

Even during the saddest of times, something bright and unexpected can happen. Mike met Gail while volunteering as a hospice counselor, and the two fell in love as he helped her through a difficult loss.

Eight years later, on April 19, Mike Wheeler, 80, and Gail Shaughnessy tied the knot in their dream wedding with 25 close family and friends at Shoreline Park.

“We appreciate the great things in life together,” said Shaughnessy, who kept her maiden name.

Wheeler and Shaughnessy originally got hitched on March 2,in a clandestine ceremony according to their close friend and reverend, Kris McGuire. The couple had hoped to have the wedding on City College’s campus but because of expensive permits and liability insurance policy, the location was changed.

“We wanted something different and something special,” Shaughnessy said. “It has been better than I could ever dream of.”

The sun was bright and pods of whales swam by as the musicians set up and rehearsed before the wedding party’s arrival.

Meanwhile, the couple and guests were picked up by a trolley at Stearns Wharf and traveled to the park.

Holding back her tears of joy, Shaughnessy admitted to preparing three pages worth of meaningful words, but decided to speak her feelings in the moment.

“I love you too and I just want to say one thing,” Wheeler responded. “Ditto!”

“Love is real and real is love,” said reverend McGuire. “And by the power invested in me since March 2, you may now kiss the bride.”

The trombones began to play “What a Wonderful World” and the bride and groom danced with their granddaughters while guests sang along.

The flower girls handed everyone bubbles and pennies as they returned to the trolley for a trip down “memory lane.” Guests made a few stops at landmarks before heading back to Moby Dick’s restaurant for the reception.

At the seaside restaurant, the newlyweds shared their first dance to Frank Sinatra’s “You Make Me Feel So Young.” The afternoon ended with food, company and music.

Wheeler was born in Los Angeles but lived most of his life in Carpinteria and the surrounding areas. In 1951, he graduated high school and attended Ventura City College, the only City College in the area at the time.

“I didn’t really want to be a musician because I knew it was a lot of work and wasn’t up for it,” he said. “So I joined the Air Force and luckily, I auditioned for the band and got to play professionally for a little bit.”

When he returned, Wheeler followed in his mother’s footsteps by becoming a social worker after attending Cal State University Northridge. He has two sons from his late wife who passed away after 46 years of marriage.

“In ’87, Dr. Chuck Woods came asking for trombone players so I began playing in Lunchbreak and Monday Madness,” Wheeler said. “…Been here ever since.”

In 2006, Wheeler met Shaughnessy while volunteering for Hospice, when he received a referral to help a woman who was caring for her mother.

“Work like that takes a tremendous amount of compassion and stamina,” said Mike Cossid, a close friend. “But, spending time doing what you love, that’s the most freeing thing.”

Wheeler acted as a superhero during Shaughnessy’s dark time.

“I really helped her. I just helped her and doing that, I fell in love with her,” said Wheeler.

The two share a beach cottage-like, senior apartment in Carpinteria and enjoy moments in life together.

Wheeler and Shaughnessy both love Santa Monica and take trips to visit as often as they can.

“As the people come off the pier we wave to them and they don’t know what to do and think we’re crazy,” he said. “We love doing that and always get a good laugh.”

“Life’s about love and fun,” said Wheeler. “Love controls everything.”