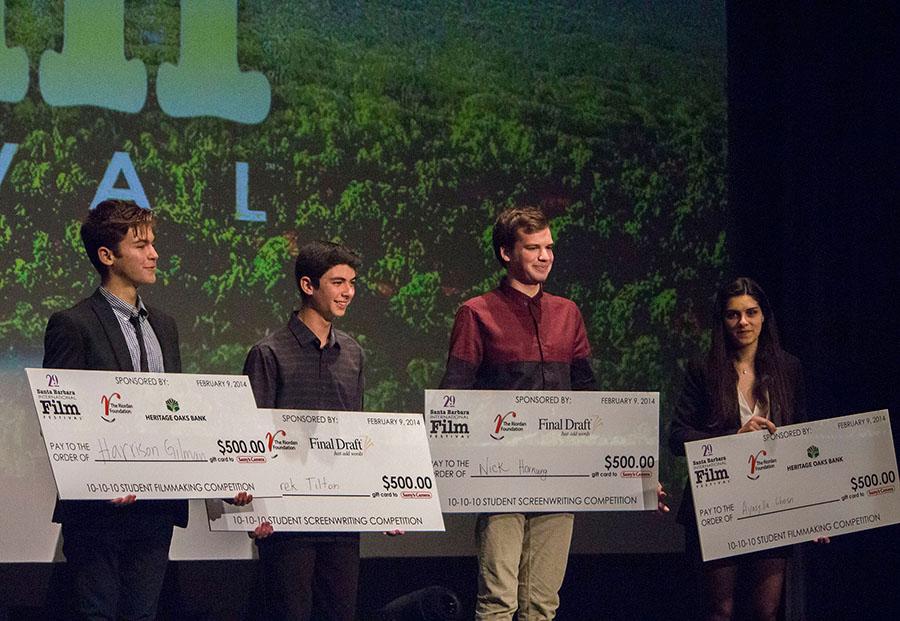 The 10-10-10 Student Screenwriting Competition, hosted by the Santa Barbara International Film Festival, chose four winners out of 10 contestants, Sunday, Feb. 9, for best screenwriting and directing. High school and college winners were chosen for each category.

“Love Hurts,” written by Nick Hornung and “The Way We Were,” directed by Ayasylla Ghosn, won for UCSB and Brooks Institute respectively.

Although no City College students came away with a win this year, the films filled the audience at the Arlington Theater with laughter and cheers.

The films aired for the first time ever in front of a panel of judges, eager parents and friends.

A total of 535 people attended this year’s event, which exceeds last year’s audience by over 200 people.

The theme selected by this year’s committee was “romantic comedy.” The screen-writing finalists and directors collaborated between December and January to re-work scripts and storyboard their films.

“I got the script in December,” said Filippa Nilsson, the director of “Kiki Lives” and a film production major at City College. “We shot for three days… the feel of the movie is what I wanted.”

Nilsson’s film focused on a young girl named Kiki and her friendship with a boy named Wyatt. Wyatt and Kiki ride bikes through the countryside while their guardians search for the two run-aways.

Nilsson, who is in her fourth semester at City College, worked closely with her screenwriter to create a script that she was happy with. After choosing the script at random, she decided she liked the relationship between the young boy and girl and would want to develop it further.

The film is not a classic romantic comedy, where boy-meets-girl and the boy and girl fall in love—rather, it pays homage to a male and female friendship that doesn’t need physical love, just genuine caring for one another.

As Wyatt and Kiki bike, they share deep thoughts—which is remarkable seeing as Wyatt is about nine and Kiki is 15 or 16-years-old.

Antoine Allain, a friend of Nilsson’s, played Wyatt’s guardian in the short film.

“It’s stressful but it’s really fun too,” Allain said. “You get that challenge of having to do something in 10 days.”

Nilsson and Allain both enjoyed being able to work with friends on the fast-paced project.

After the winners were announced, press and families gathered around the stage to congratulate the contestants. Although Nilsson didn’t win a $500 dollar gift card to Samy’s Camera, she and her crew were happy to have been a part of the experience.