Behind the scenes look at the original production ‘Project Love’ 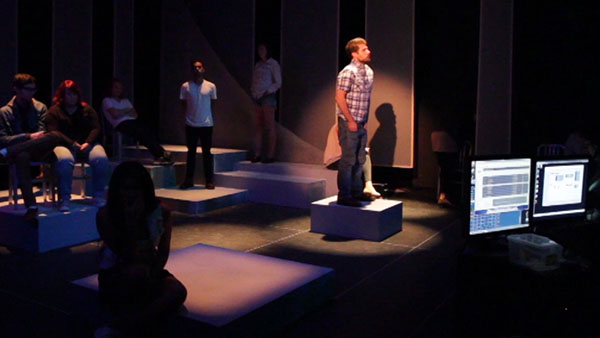 Behind the red curtain there is an often unnoticed technical and aesthetic aspect that is vital to the refined performance the audience sees.

Before the production “Project Love” opens on Nov. 13, students and designers must first finish and fine-tune the set, lights, sound, costumes and video.

“Project Love” is a student original production, meaning all areas needed to be designed from scratch. Student actors collaborated with co-creators, Katie Laris and Alice Scharper, to produce a script.

Stagecraft Instructor and Technical Director, Ben Crop, oversees all the technical areas of production except costume.  There is one designer for each area and Crop facilitates their work.

Working in collaboration, also called “devised theatre,” has its benefits and difficulties.

“I think it is more conducive to the creative process,” said Crop. “It’s easier for a team to collaborate because they are all creating it together as opposed to trying to recreate something that already exists.”

There was a need to grasp the central story. In the documentary-style play, actors tell different stories about love and then reflect on their experience.

“We’re using the tech elements to tell the more overarching story rather than all the individual ones. “Otherwise it would get laborious,” said Crop.

Personally, Crop loves the devising aspect, but would rather show the stories than recount them.

The main story is the actor’s journey, and the lights and sound were designed to help distinguish between stories. When an actor finishes telling a story there is an exhale sound that lets the audience know the scene is over. Similarly, the stage lights come to a neutral space so the audience knows the actor is no longer telling the interview story but reflecting on their journey.

Like the neutral lighting in transitions, Costume Designer and Instructor, Pamela Shaw created costumes in plain colors to draw attention to what the actors say not what they are wearing.

There are three students in the costume crew who maintain and organize the wardrobe.

Costume crew head, Sondra Fink, 21, has been at City College as a theatre costume major for four years. During that time she has worked on roughly seven productions.

“My role is to manage my crew and make sure every costume note or problem gets fixed before the start of each show,” said Fink.

Fink is the assistant to the designer and helps Shaw with day-to-day duties. She also helped compile the research, which Shaw used to create the costume design.

There are no wardrobe changes in this play, so there are only three crewmembers, rather than the normal five. Fink says she rather be running around in the fast pace and hectic traditional plays but the low intensity of this play is a nice break.

In the shadows of the control booth, students operate the lights, sound and video projections.

The sound is controlled by student Michael Thompson who is no stranger to show-business. Now retired, he had worked in motion pictures as a stuntman and assistant to the technical advisor for MGM studios.

The light board operator is first-semester student, Luisa Gonzalez. In the past she has done set design, but this will be her first time working sound.

“I really want to learn to design the lighting but you know this is where you kind of start,” explained Gonzalez. “But either way I’m learning a lot.”

Gonzalez is responsible for over 120 cues that change the lighting on the stage, which the stage director calls for throughout the performance.

“It’s amazing to see how each element contributes to the show,” Gonzalez said.

The video projections are run by 18-year-old, Cesar Franco, a first semester theatre arts major. Originally part of the stage crew, Franco was promoted to video tech after the first student quit.

During the show he individually clicks each slide for each scene.

Franco is an actor but did not audition for the show and says that he enjoys his experience in the peaceful booth, a nice break from center stage.

The set was designed by an outside hire, Francois-Pierre Couture, who also designed the set for “Becky’s New Car” last spring.

The set had to be designed before the play was actually finished, and in collaboration with Scharper and Laris, he went through different versions.

The final set features different sized blocks that act as destinations for the actors to move to and from.

“We bounced ideas back and forth and we decided to have some fabric that we can project on yet still have layers of transparency,” said Couture. “There is lightness and honesty to it.”

This production being abstract and constantly changed proved stressful for the tech designers, but also left them with a creative opportunity to create something from nothing.