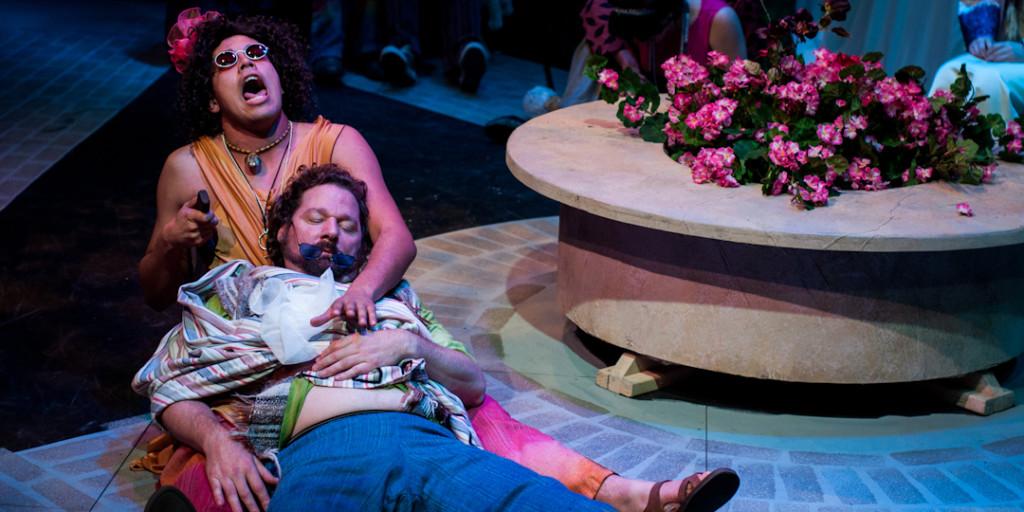 If you’re getting lost in a magical Athenian forest, be sure to wear some flowers in your hair.

“A Midsummer Night’s Dream,” which is now playing in the Jurkowitz Theatre, captivates from the opening scene featuring the elaborate love affair in play.

Directed by theater department co-chair Michael Gros, the production sets the stakes high early on in the story. A prearranged marriage is enforced upon Hermia (played by Megan McCorkle) against her will. Hermia is in love with Lysander (Colton Fair) and refuses her father Egeus’s wish to marry Demetrius, the object of her friend Helena’s affection. Father Egeus (Craig Scott) cites an ancient Athenian law that declares that his daughter Hermia must marry the man she does not love, or die.

The law is the law, however questionable. But, as a gypsy later remarks in the first act, “Reason and love keep little company nowadays.”

Disillusioned with their options, the rebellious youths reject the traditional values of their elders and run away into the magical forest where fairies reside.

The most remarkable element of this production of “Midsummer” is its attention to detail. The 400-year-old story has been translated to a 1960s setting. Since all the original Elizabethan dialogue remains in the script, the Summer of Love setting reveals itself through the music, set and highly ornate costumes.

Songs like “A Whiter Shade of Pale” by Procol Harum, “Wild Thing” by The Troggs, and “She’s a Rainbow” by The Rolling Stones orchestrate the production throughout.

Parked in the forest is a turquoise Volkswagen van belonging to an acting troupe named The Rustics who rehearse a “most lamentable comedy” to perform before the royalty in Athens. The gypsies of the troupe dress like genuine flower children and Golden Gate Park Be-In hippies with their tie-dyed blue jeans, paisley ascots and sunglasses with annular colored lenses.

The fairies, abundant throughout the forest, dress in technicolor outfits. They have deity-like control over those who wander. They manipulate and play with the humans’ romantic emotions for their personal entertainment. Consequently, the humans cannot distinguish between reality and a dream state.

The skillful operation executed by the fairies begins with the search for an aphrodisiac flower, which causes whoever is dosed to fall in love with the first person they see upon waking.

The play consists of a grand total of 26 actors, all of whom are imperative for the story’s development.

The writing is rich, although esoteric at times. Shakespeare waxes eloquent lines of universal truths in his commentary on the capricious nature of love. The course of true love never did run smooth, as Lysander notes.

The imaginative play finishes with a gratifying conclusion, howsoever strange and admirable.

“A Midsummer Night’s Dream” is now playing in the Jurkowitz Theatre until Nov. 18. It begins again the week after Thanksgiving on Wednesday, Nov. 28 until Saturday, Dec. 1.

Prices range from $16 for general admission, $13 for seniors and $8 for students.